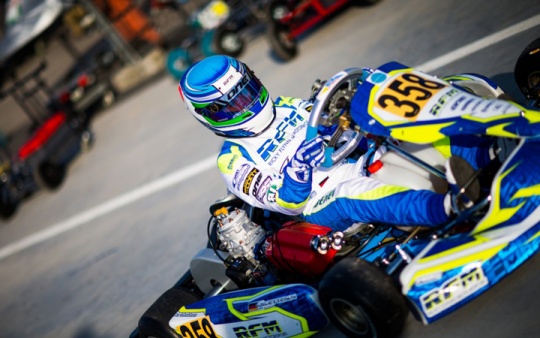 The 13-year-old already held a steady Top-10 placement during the free practice sessions. Following a difficult qualifying with only P29 from 64 starters in the class OK Junior, Niklas also did not have a good run in the first race, finishing in 15th place. Chaotic weather conditions ruled on Saturday and after a very wet Warm-up, in which Niklas underlined his immense driving talent with a fifth place, all further races were cancelled for the day due to snowfall.

The weather had calmed down on Sunday and the 13-year-old started into the pre-final from 15th on the grid. With strong overtaking moves and lap times that equalled the front runners, Niklas fought his way up into eighth position. However, a given time penalty of five seconds due to a damaged Front wing put him back into 12th place. But even that was enough for entering into the great final. Niklas came fully motivated from 34th on the grid and continued with his charge from before: He made up a total of ten positions thanks to great overtaking and fantastic speed. He eventually crossed the finishing line in 14th place and was by far the best German racer.

“The penalty was very annoying, especially since it was not my fault”, said Niklas. “It is even more annoying, because it was the same German competitor, who drove into the back of me in Adria last year and I was forced to hit the guy in front of me again. It seems that some drivers are simply overworked here!”, the young driver from Trier continued. “Despite the poor qualifying, I am pleased with how the weekend went. I had a lot of fun and some great overtaking manoeuvres. I was also right there from a speed point of view. The direction is the right way and I am looking forward to the next races.”

Niklas has now headed to Sarno for tests until Wednesday with his team Ricky Flynn Motorsport. The next race will take place in Sarno from 17th until 20th March 2016.