Author: Vroomkart International
Thanks to its illustrious Kart Club, Hong Kong has one of the most exciting karting history: the organization of the Hong Kong International Kart Grand Prix is treasure that brings back memories of what karting used to be. For over 25 years, World Champions like Wilson, Fullerton, de Bruijn, Trulli, Fisichella, Rossi, Beggio, and a legendary Ayrton Senna entered for this exciting racing event to enchant huge crowds.

Hong Kong: one of the best histories 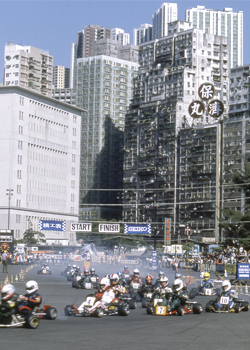 of cultural mix, until recent years under British rule, a real mixing pot of relentless progress of western societies joined with the typical industriousness style of Asian cultures. It was so even in kart racing. In fact, thanks to its distinguished kart club, Hong Kong has been a forerunner of top level international karting for over 25 years, organizing one of the most celebrated inner city kart race event of all times: the Hong Kong International Kart Grand Prix. World Champions such as Mickey Allen, Mike Wilson, Terry Fullerton, Peter de Bruijn, Jorn Haase, Jan Magnussen, Jarno Trulli, Giancarlo Fisichella, Danilo Rossi, Gianluca Beggio and Alessandro Manetti and the legendary Ayrton Senna - just to name a few – have been protagonists of some of the most exciting kart races held before thousands of spectators. On schedule as the last international race of the season, usually held at the end of November, the Hong Kong International Kart GP was organized by the Hong Kong Kart Club, which still holds one of the most exciting histories of karting. A real treasure that brings back memories of what karting used to be. To give an example, the Hong Kong Kart Grand Prix was like the Monaco Formula 1 Grand Prix: a sensational racing event held in the centre of one of the most flourishing cities in the world.

Julia Lau, Administrator of Hong Kong Kart Club, is one of the earliest members of the club.
“I’ve been involved in karting since the 60s – Julia says – first as a kart driver, when we had a category specifically set up for female drivers, and later as HKKC administrator, when I was one of the few female drivers left.”
The Hong Kong GP, in fact, has always been a forerunner of karting. Thanks to a considerable contribution by sponsors like Marlboro, it was the first karting event to give prize money to the first five drivers and a stunning HK$40,000 to race winners. “There had never been anything like it before – says Julia – it was a big incentive for the best drivers in the world – usually from Europe – to make the trip all the way to Hong Kong. More than 200 drivers from all over the world – including Japan, Australia and USA – gathered in Hong Kong to build up excitement the huge crowd that came from the entire region. During the heyday of the Hong Kong GP in the 80s, we had to request the presence of the police well in advance in order to secure the area, and make sure the enormous crowd could assist to the event in safety.”
In fact, beside the first edition (June 1967) held in Sekkong Airstrip, Sekkong Army Camp military airstrip, which is 870 m. long, the Hong Kong GP took place in Victoria Park located in the city centre. The Hong Kong Kart Club converted 4 football pitches and 8 basketball fields into a temporary circuit, at first just over 600 m. long. Then, the Victoria Park race soon grew to be one of the most important kart races of the season, comparable to the World Championship, and the venue was increased to just over 800 m. It became so important that for the latest editions of the International Kart GP, when the Hong Kong GP had become a legend in its own right, the circuit was increased to 925 m., with two Grand Stands and a VIP Stand along the home straight. “During the heyday of the International Kart GP, Hong Kong was the heart of karting in the region – says Julia. Karters from the Philippines, Malaysia, Singapore, Indonesia and Thailand came to Hong Kong to buy their equipment, because we could take advantage of our special link with Great Britain to bring the best of western markets to the region.” 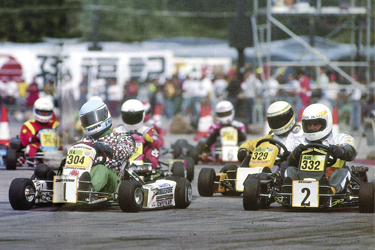 Besides the annual international event, the Hong Kong Kart Club continued to use the Sekkong Airstrip for its club activities. Truck loads of rubber cones, used motor-car tyres, mills barriers etc. were transported to Sekkong early in the Sunday mornings to set up temporary tracks. After the day’s activities, the track was to be dismantled and cleared from the airstrip in the afternoon. After the interdiction of British military authorities to use the Sekkong Airstrip, the Hong Kong Kart Club started projects to build an international standard permanent kart track with all necessary supporting facilities. Unfortunately, the project underway for over two months was stopped by the Lands Department, as that particular piece of land was designated for the future development of the electronic railway. Soon after, two privately owned kart tracks materialized: a 700 m. kart track at the Lau Shui Heung Village, and a 1200 m. track at Maipo, with both tracks providing rental kart services. It was the first time karting was opened to general public and attracted a large number of new comers to join the Hong Kong Kart Club. The Club had recorded a maximum of 120 entries at a single race day and pushed the achievement of the Club to its highest peak.

The success seemed relentless, both for the karting club local and international activities. “It was fantastic to see all those champions cheered on by such a huge crowd – continues Julia – I don’t think anyone ever thought such success could come to an end.” But with the introduction of the Environmental Protection Department at the end of the 80’s everything changed. Air and noise pollutions were the two deadly factors in karting, and the EPD didn’t waste much time before enforcing prohibitions. Also, the ban of tobacco products to sponsor sports activities was another big blow to the annual International Kart Prix.
“The last edition of the International Kart GP in 1992, saw yet  again the best international karters putting up a great show. Rossi (who never managed to win in Hong Kong), Fisichella, Trulli, Manetti, Beggio, Hellberg, Magnussen, Munkholm (winner of the last edition) to name the most prestigious drivers, took on Formula K grids without realising that it was to be the last time round for the Hong Kong International GP.”

Hong Kong Kart Club post-Victoria Park splendour
After the abrupt halt of Hong Kong karting in the early 90s, local karters turned to facilities up north in China, like the Honey Lake Kart Track at Shenzhen. Following this great success, kart tracks were built all over China, and the Hong Kong Kart Club took this opportunity to organize the HKKC Championship series using those tracks. In 2000, the Hong Kong Kart Club tried to revive kart racing events in Hong Kong. With the sponsorship of Ericsson and the support of Sports Development Board and the Tourist Association, the Ericsson Kart Master Series was organized over 3 rounds, two in China and one in Hong Kong, the latter held at The Tamar, a temporary 700 m. long track. The 4-day event was a great success and revived the Club’s hope to build a permanent track in Hong Kong. But the following approach to the Government, Airport Authority, Sports Development Board and Tourist Commission was in vain. 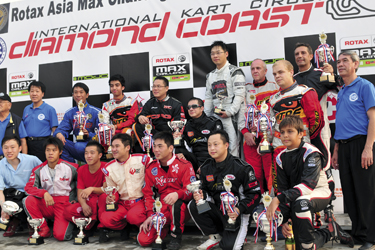 In 2004, a private enterprise approached the Club to express their intention of building a kart track in Lung Kwu Tan area. In the middle of 2006, the construction of the track had come to the final stages. With the blessings of the Home Affairs Bureau and Leisure and Cultural Services Department, permits and waivers were obtained from various government departments, and under the supervision of the Hong Kong Kart Club, the Diamond Coast International Circuit was finally in operation. The Hong Kong Kart Club organized their first race at the end of year 2006 and started their 2007 HKKC Championships in April 2007.
Following the demise of Hong Kong karting in the early 90s, things at a regional and international level have changed a lot. “Many drivers have gone to race in China because Hong Kong ceased to be a regional and international karting hub – says Julia -. Also, the cost of  racing in China are a third compared to Hong Kong, both in terms of facilities and technical support.” Besides, the world of karting has radically changed. The international federation is looking for friendly governments willing to invest in facilities and promotion, something that has been perfectly interpreted by Macao governing bodies for instance (to stay in the same region). “Our prestigious history cannot be the sole factor to regain the same popularity of HKKC heyday – adds Julia -. If we are to regain that success, it will only be with government support, which so far has not been adequate.”

The hope, of course, is that karting in Hong Kong will prosper through Government and public support, so that Hong Kong Kart Club will be able to organize international standard events in the near future to regain the prestige, recognition and status as the world’s best.