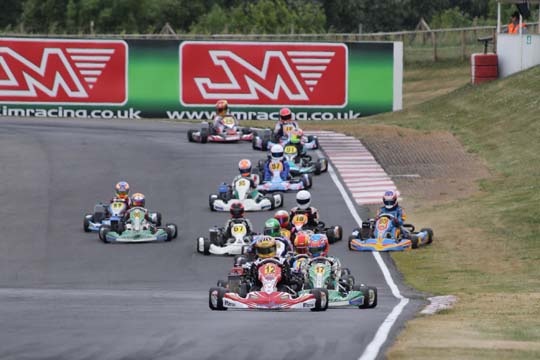 Author: Vroomkart International
Back to the home of motorsport: After 2005 the ROTAX MAX Euro Challenge finally returned to Great Britain.

For the halftime race of the season the amazing PF International circuit in Brandon, close to Grantham, hosted the third round of the year from 18th to 21st of July.

PF International is one of the most modern tracks in Europe. After its opening in 1994 it has been developed constantly. After a major transformation in 2011 the track measures 1.382 metres and incorporates a spectacular bridge with flyover, which is almost unique in karting! So it was no surprise that the European ROTAX elite was crazy about the race at UK’s premier karting facility. Again the categories of MAX Junior, MAX Senior and DD2 came up with full grids, counting about 130 participants all told for the season halftime. But not only the great facilities of PF were attracting the drivers: As the stop on the Island marked the summer race, the organizing RGMMC Establishment organised a barbecue with hog roast and live music on Friday, which was free of charge to all drivers.

So Friday evening the paddock was reserved for party time and welcomed plenty of guests, celebrating the 10th anniversary of the ROTAX MAX Euro Challenge in an amiable atmosphere. Finally the key personalities of RGMMC, Roland, Lynn and James Geidel were rewarded for their efforts with a congratulation cake and some personal words of race director Nigel Edwards and commentator Ken Walker. Even if the party was a highlight of the UK trip, priority was given to the racing action, which proved to be the most spectacular of the season this far.

MAX Junior: Win for Guan You Zhou after tough Final

Who thought that the prefinal was thrilling, was disabused in the final. Rawson, Price, Wooder, Zhou were the pace makers again. After only a few laps the group grew, as Preining and even Hall hooked up with the leaders. This sextet honoured a cease-fire quite a long time of the race distance until the last two laps were heralded. What came next was countless of overtaking action, which unfortunately did not go off without a hitch. First victim was Hall again, being pushed within the leading group. But he was lucky by keeping his kart on track, rather then Preining and Price, whose collision made them drop back numerous positions. Finally only the chequered flag could stop the breath taking battle of the juniors and it was Rawson crossing the line first in front of Zhou, Hall and Wooder. But as expected, the race control analysed the rough incidents and finally penalized Rawson by ten seconds and even excluded Wooder completely. By this Guan Yu Zhou inherited the win ahead of Connor Hall and Mathias S Kristensen (RS Competition). The championship remains an open matter: Hall defende the lead, now counting 242 points, in front of his teammate Zhou with 224 points. Kristensen is third with 206 points.

The 16 laps lasting final was not less thrilling. Up to ten drivers were in the run for victory and the lead changed almost every lap. With Philip Morin, Harry Webb, Mark Litchfield, Ed Brand, Charlie Eastwood and John Stewart (ST Racing) one counted six different race leaders! While most of the race was exemplary karting, the competition became more heated in the final spurt: Championship leader Webb clashed with Brand, thus losing a lot of positions and finally retiring from the race with a puncture. Unfortunately Brand was even involved in another incident: It was the very last lap when the Intrepid driver tried to attack the leading Litchfield. Brand hit Litchfield from behind, causing a real chain reaction: While Brand took the lead and the win, Litchfield had to struggle hard in order to keep his kart on track. The following Eastwood and Stewart tried to avoid the situation but found  themselves being piled up unintentionally. After the race Brand was given a penalty of ten seconds, which threw him back to 18th place. The victory went to Litchfield, who won his home match right in front of Kyle Fowlie (Strawberry Racing) and Connor Jupp, both inheriting a podium position after a turbulent final. Yet the results have to be considered provisionally due to an appeal of Ed Brand. Although he is still without a season win, Philip Morin's consistency is rewarded in the championship. After PF, where he finished fourth, he took over the lead by 227 points. Only five points behind Charlie Eastwood still has all chances for the title, which applies to Harry Webb, being tied with his teammate.

In the final, ne only counted the second lap, when De Ruwe got off the track, as a result of the close fighting in the leading group. The FK driver dropped back to the end of the grid but cut his losses with a remarkable tenth place in the very end. On the top Sean Babington took the lead at an early stage of the race. While the rest of the pack kept fighting, he increased the gap more and more, finally winning by an impressive margin of almost six seconds. Behind the man on cloud nine positions were far away from being settled. About ten drivers kept fighting for the remaining podium positions, which finally went to Pullinger and Backman.
As for the Masters classification Italy's Alessandro Manetti (Josh Hart Racing) did the most outstanding job...

Again RGMMC broadcast the action right to many thousand viewers all around the world. In order to provide an even more authentic experience, the coverage even came in amazing HD pictures. If you missed it, you find all action from the PF event at www.rgmmcmedia.com, where you will find the recorded races powered by the RGMMC Television channel. The decisive race of the ROTAX MAX Euro Challenge will be held in France. Salbris will be venue of the fourth round form 2nd to 8th September.

So stay tuned on the official website www.rotaxmaxeurochallenge.com, where you get all information regarding reports, photos, results and live TV stream.