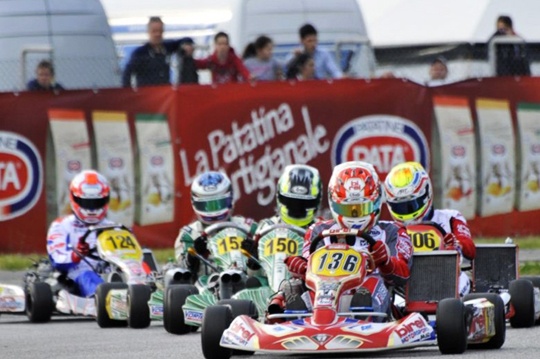 Press Release by: Birel
The Venetian driver won the Saturday Final during a very busy and successful weekend for the Birel team and the TM engine specialists
Sarno (April 4-7) - Birel Motorsport took part to the 2nd round of the WSK Master with the main goal of testing in a race context the latest technical solutions developed for the imminent start of the CIK-FIA championships. In this respect the Master Series and the Sarno track proved to be the ideal context considering that the Campanian track will host in 15 days the Euro Series and in October the World Championship of the KF and the very high level of drivers and teams. In this scenario Birel Motorsport lined up Paolo De Conto in KZ2 to test chassis and gears with the Bridgestone tires, to be used in the imminent European Championship, while George Russell focused on the KF category. In addition to the two top drivers, the Lissone company lined up also the young Aubry and Baiz in KFJ and Lukas Podobski in 60 Mini.

In the KZ2 the usual format of the double Final took place. On Saturday Paolo De Conto got a stunning success at the end of a high-level competition with Leclerc and Pex, who finished right behind him, while the provisional leader of the Championship, Verstappen, ended in 6th place.  On Saturday De Conto competed with improving performances and after ending the two rounds at 5th and 2nd place, in the first stages of  the Final and with great determination he led the race until the end.
The Venetian driver and his Birel-TM confirmed to be at high levels of competitiveness also on Sunday when he won the 1st round and ended 2nd in the 2nd qualifying race. In the Final his "pole" position was ruined by a technical problem that forced him to withdraw in the 4th lap.  The victory in the Final on Sunday went to Negro who, in the final stages, got the better of Leclerc.
In the Championship, Verstappen is still the leader, but De Conto is in the 2nd place, just 30 points behind, despite the withdrawal in Sarno. Even in the KF category the Birel team focused on the technical work: George Russell mainly engaged in defining some setups in a race where anyway he was always among the first ones ending 7th in the Final (won by Basz on Boccolacci). In the category KFJ, on the other hand, the great protagonist was bad luck: the Birel drivers were involved in two contacts that eliminated both the French Aubry and the Venezuelan Baiz in the Pre-Final.  In the 60 MINI, finally, one more positive weekend for the very young Lukas Podobski, who ended 7th in the sprint to the finish line just 788 milliseconds behind the winner.
The Birel team will be back on the Sarno track in full force in 15 days for the 3rd round of the Euro Series, while the CIK-FIA season will begin on May 19th, with the 1st Euro event dedicated to the KZ classes.

The comment by Paolo De Conto (KZ2): "I knew that the 1st victory for the Birel-TM was going to be near, but getting it in this weekend, when the whole team did an amazing job to test different technical solutions for the next Euro Series and above all the European Championship beginning in May, is a major satisfaction. Furthermore, the value of our competitiveness is a positive and important signal for all the Birel teams engaged in the National and International Championships; they are customers to whom we can guarantee a winning chassis with extraordinary traction and braking which is also very well balanced and easy to tune under any track conditions."