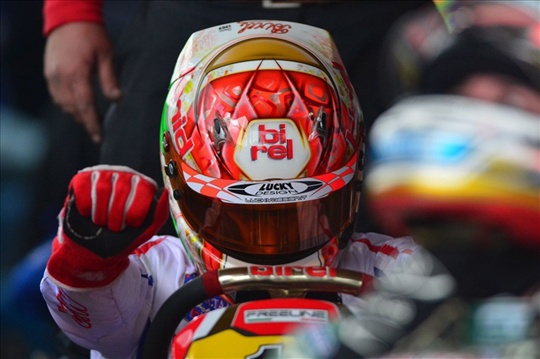 Press Release by: Birel
The Sarno weekend proved to be a very good one for Team Birel, even if a series of race incidents and rain on the Sunday shuffled the cards for the final results.
In the KZ category, Birel's lead driver Paolo De Conto, who scored the 8th fastest time, was the victim of a collision during the second lap of the first round. This caused a technical problem that forced him to end the round only in eighth place. During the other two rounds, two excellent second places led to his third position on the pre-final B starting grid.

The unexpected rain on Sunday caused problems for all the drivers – in fact, nobody could test their setups. De Conto ended his prefinal in third position, gaining him fourth place on the starting grid for the final. Despite this, he managed to gain very important championship points.
Excellent results also for Jan Midrla and Menno Paauwe who, after proving how fast they were during the qualifiers, came in a little slower when fighting in the final phases, also due to some collisions during the race.

In the KF category, Stefano Cucco, alongside new arrival Chaimongkol Sasakorn, were always among the fastest drivers right from the start, attaining the 13th and 14th fastest times. However, various problems in the qualifiers led to their pre-final grid positions being lower than expected. Cucco lost a qualifier outright due to another driver who, during the opening warm-up lap collided with Cucco's kart. The resulting damage proved too great and Cucco had to pull out.
Once again, the wet track made it difficult to recover positions, even if in the final Cucco managed to reach 10th place (after the qualifiers, he was ranke
d 44th), while Sasakorn, despite not being experienced on wet tracks, came in 15th in the final.

In KFJ, Gabriel Sereia proved his speed and competitiveness from the start, achieving the 16th fastest time. During the first qualifiers, a collision forced him to pull out, while in the second he achieved 5th place, and 3rd in the third round, demonstrating his excellent skills in fighting for the highest positions.
On the Sunday morning qualifiers, a light collision knocked him back to 12th place, forcing him to start pre-final B in the sixth row of the starting grid. After a number of changes in position, he crossed the finish line in 11th place, giving him the 11th row on the starting grid for the final. Excellent driving led to a notable recovery of his position, allowing him to end the race in 11th place.