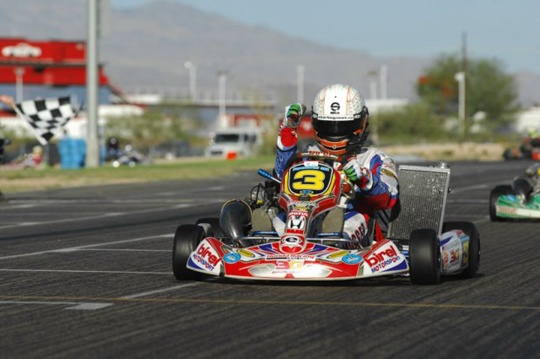 The 2013 season has been successful on-track season for the 3G Kart Racing operation, supported by Burger King®. Both on the national and regional level, the Birel kart squad has earned victories and championships. With the year closing out, the biggest race of the season for the seven drivers under flying 3G/Burger King®/Birel colors is upon them - the Superkarts! USA SuperNationals XVII in Las Vegas. The 3G team out of Katy, Texas is settling into the Rio All-Suite Hotel and Casino, the operation will support racers in four classes with a stable of drivers that are more than capable of bringing its share of podium finishes at the worlds largest kart race.

Leading the way for 3G will be a long time member Jordon Musser, who will contest the S4 Master Stock Moto class in Las Vegas. Musser enters the final stop on the 2013 SKUSA Pro Tour as the point leader in the S4 chase. A perfect sweep of the SpringNationals in Tucson, Arizona catapulted Musser to the top of the championship standings early with no intentions of letting it go. September saw Musser claim his third King of the Streets title at the famous Rock Island Grand Prix. Musser looks to remain atop of the point standings following SuperSunday in Vegas to add to his four Rotax Grand Nationals titles.

Garrett Boone of Houston, Texas will compete as the only 3G Kart Racing driver in the very competitive S2 Semi-Pro Stock Moto class. Boone narrowly missed out on the Texas ProKart Challenge S2 championship despite two wins and an impressive four runner-up finishes over 10 races. The 2012 version of the SuperNationals saw Boone come home with a very respectable top-10 finish after qualifying outside the top-15. In what has been a bit of an up and down season on the Pro Tour, Boone sits third best coming into the final round of the season with the very achievable goals of moving up the order.

In the youngest of the shifterkart drivers competing at the SuperNationals – the S5 Junior Stock Moto class – 3G Kart Racing will support two drivers. Andretta Young, a Katy, Texas native, is coming off a fourth place finish in the Texas ProKart Challenge S5 championship and is returning to the SuperNationals after a top-20 result the year before in 2012. 3G Kart Racing will also field Graig Alvarez in S5. Alvarez finished 2013 with a strong seventh place finish in a very loaded group of S5 drivers in the Texas ProKart Challenge.

Three drivers out of the 3G Kart Racing tent will contest the TaG Cadet category at the SuperNationals. Texas ProKart Challenge third place finisher Jak Crawford is a regular on the 3G roster and he will be joined by Nickolas Brueckner and Harrison Hoey. Brueckner is a multiple winner at the Texas PKC and also earned the Mini Max championship at the Florida Winter Tour. Hoey comes to compete in the SuperNationals all the way from Queensland, Australia. Spending most of his time racing with the Australian Karting Association, Hoey has ran well with the AKA, and is prepared for a strong performance in his first ever trip to the SuperNationals.

For more information on their trackside support, arrive-and-drive opportunities, visit www.3gkartracing.com or find them on Facebook