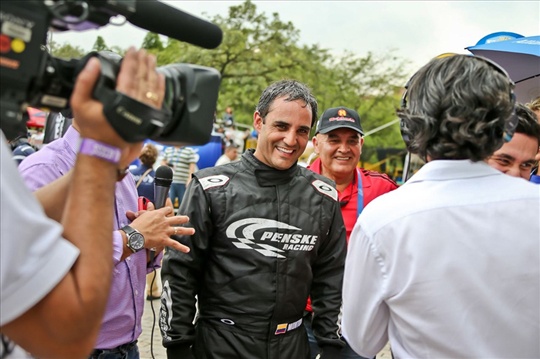 Press Release by: Birel
2nd place for Juan Pablo Montoya, driving Birel Rotax DD2, in charity race organized for his foundation.
It was Juan Pablo Montoya who organised this third edition of the "CARRERA DE ESTRELLAS COLOMBIA" charity karting event, held on streets of Medellin, Colombia. In addition to the winners of the two races, event participants also included many well-known personalities from the world of motor racing: new and promising Colombian talent from IndyCar, Indy Lights and Grand Am series as well as NASCAR drivers Kurt Busch and Joey Logano all took to the track at the wheel of the Birel karts provided by H2O Racing, the Lissone-based firm's official importer in Columbia.
The race was run in Rotax DD2 karts over two heats: the first by day, on a track which was initially wet, and the second at night on a dry track, illuminated by floodlights.
The daytime race was won by Julian Leal, who has twice been on the podium in this season's GP2 series. Behind the winner followed a thrilling battle for second place between Gabby Chaves from Indy Lights, Rookie of the Year Carlos Muñoz from the Indianapolis 500 series and Juan Pablo Montoya driving his DD2 Birel kart.
Montoya, who is preparing for the IndyCar 2014 series, called upon on his experience as a top driver in race 1, going from the last position on the grid to take second place on the podium. In race 2, under the lights and on slick tires, Juan Pablo Montoya again made it into the leading positions, achieving 4th place behind Helio Castroneves, Joey Logano and Gabby Chaves.
The event, broadcast live on national television in Colombia, was attended by a packed audience, with all proceeds going to the Fundación Fórmula Sonrisas set up by Montoya and his wife. The foundation helps thousands of disadvantaged children in Colombia to improve their quality of life through sports education.

Ronni Sala commented: "We are proud to offer our services for important social initiatives such as that organised by Juan Pablo Montoya, who has always been close to our brand. I'd also like to thank our Colombian importer, H2O Racing, for providing these great drivers with the ROTAX DD2 Birel kart and I congratulate the young Valeria Vergas and Sebastian Montoya (youngest son of Juan Pablo, who finished on the podium in the Rotax Micro Max category) on the excellent results achieved this season. I am also very pleased with the hard work undertaken in the BABY category, which has been a great breeding ground for young Columbian drivers for three consecutive years now."