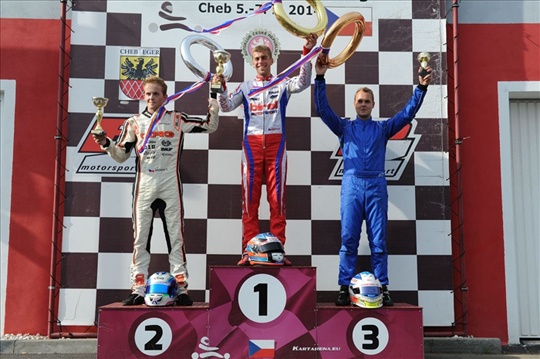 Press Release by: Birel
Although there is still one event remaining until the end of Czech Karting Championship, the battle for the crown of champion in the most prestigious KZ2 class is already decided. Jan Midrla, Birel factory driver and JOKA Kart Team driver, successfully defended last year’s title, becoming the king of Czech karting for the third time in his career, having previously won the KZ2 category in 2011 and 2013.
During the first five events of this season Jan Midrla was almost unbeatable, even though at the start of the year he didn’t know what to expect from new competition and rivals who had entered the category. Although his rivals had shown big effort and in some cases were able to keep up Jan’s pace, the results speak for themselves…

A successful member of the Czech national team, who gained his skills in the early years of his career in EASYKART categories, with four pole positions, eight of ten final heat wins (in remaining two he scored second places) and in superfinals he had excellent outcome: five wins from five races.

Based on these results, he has an unassailable lead in the provisional standings of the championship and  cannot be beaten in the last event of the season in Vysoké Mýto, leaving him free to concentrate on other racing activities, as well as on his studies at the Faculty of Mechanical Engineering at the Czech Technical University in Prague.

Jan Midrla, triple Czech karting champion in KZ2 class: “Of course, I am really happy that we were able to clinch the third title in KZ2 category in Czech Karting Championship. It was a difficult season, but as in two previous cases, also this time we have such a points lead, that we do not have to compete in the last race. I have to say big thank you to JOKA kart team and Josef Kališ, whose commitment and experience again played an important role. I am also very grateful to Petr Klobás, who has perfectly prepared TM engines for us. On the other hand, I am little bit sad, that I wouldn’t race in Vysoké Mýto, because I have there the biggest fan club of my family and friends every year. The defense of the title is always difficult, but it is also a motivation for our further work. Our goals remain unchanged and high for the rest of this season, as well as for the next year.”

Jan Midrla’s racing season is still far from over. In less than four weeks he will take part in CIK-FIA Karting World Championship in Sarno, Italy (October 8 to 12).