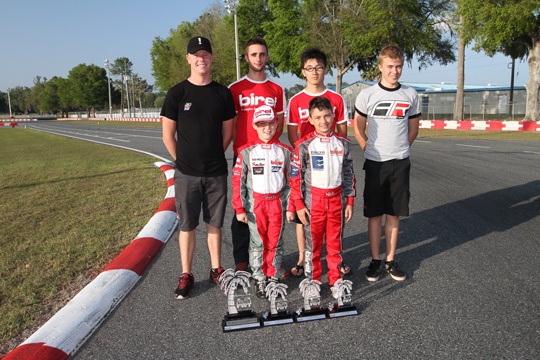 Heavily out-numbered, Birel outscores every other brand with 6 wins.
THREE OAKS, MI (March 27, 2013) - Heading into final round of the Florida Winter Tour Rotax Max Challenge, it was expected that TonyKart would be heavily favored at their home track at Ocala Gran Prix in Ocala, FL. When the dust settled however, Birel drivers had logged nearly half of the wins, with six on the weekend, more than double any other brand and sealed two championships in the process. KMA North America’s , Ben Cooper, scored his third win of the season en route to the Rotax DD2 title while Nicholas Brueckner  used a pre-final win and two runner-up finishes to secure the Rotax MiniMax title for MRP-Birel America.
“It is a great weekend for Birel teams and racers,” said MRP-Birel America Engineer, Tim Lobaugh. “In each category we had a presence and nearly any condition, Birel was very well represented. It was great to see how strong a weekend we had with the 2013 models considering how out-numbered we were on the entry list. This should be a sign of things to come.”
In addition to the 6 wins and two championships, Birel drivers also accounted for ten podiums and four pole awards.
In the Rotax DD2 class, Ben Cooper struck first with pole in DD2 and fought hard early in the final and retook the lead and pull away for a big win to lock up the championship. Cooper elected to sit out Sunday’s event and teammate, Kevin Ludi overcame a rain-soaked event to pull out to a large lead and the eventual win, giving Birel both DD2 class wins for the weekend.

In Rotax Senior, KMS North America team drivers, Luke Varley and Tadasuke Makino each had strong weekends on their RY30-S5 chassis. Varley had started off the season very strong at the beginning of the season but have a very frustrating weekend in Homestead last month. The ’09 Rotax World Champion would recover well in Sunday’s final and run a near perfect race. The UK-born driver bolted out of his 6th place starting position to claim 2nd in the opening lap, then ran down his teammate, Makino, to take over the lead six laps later, rolling to a strong win. Makino would end up 3rd, which gave the Japanese driver two podiums and a pole for the weekend after his 3rd place in Saturday’s final. The pair would end up 5th (Makino) and 6th (Varley) in the final championship standings out of 60 entries.

In Rotax Junior, Andersen Racing’s Antoni Ptak scored a breakout victory in one of the most hotly contested classes on the tour in Sunday’s final. The young driver from Poland took over the lead early in the race and stretched out a large enough margin to hang on for his first career win aboard his RY30-S5 to end the season on a high.
The MiniMax category is one of the most competitive classes on the Florida Winter Tour, which several drivers contesting for the lead nearly every single session. The Birel C28R chassis however, managed to claim all six pole positions on the season at the hands of MRP-Birel America drivers, Nicholas Brueckner (4) and David Malukas (2). Brueckner also locked up the championship in dramatic fashion, needing to have a strong weekend after coming to Ocala trailing in the championship fight. He finishes 2nd to Malukas on Saturday, who swept the entire day, then took the pre-final win on Sunday followed by a 2nd place in the final. The results awarded the rookie in the MiniMax class a FWT title by 25 points. Malukas would slip to 4th in the championship after a DNF in Sunday’s final.

In MicroMax, it was Harry Coulton that led the charge for Birel in his C28R. The MRP-Birel America driver fought his way through a rough qualifying session to work his way to the front pack in both finals. The young driver would finish 5th in Saturday’s final, but take a commanding win in Sunday’s final, setting the fastest laps of the race on both days. He would take 4th in the championship standings.

To see what Birel has to offer for 2013, visit www.BirelAmerica.com or LIKE us on Birel America Facebook! To find a dealer near you, call MRP Motorsport at 269-756-9133 or sales@mrpmotorsport.com.