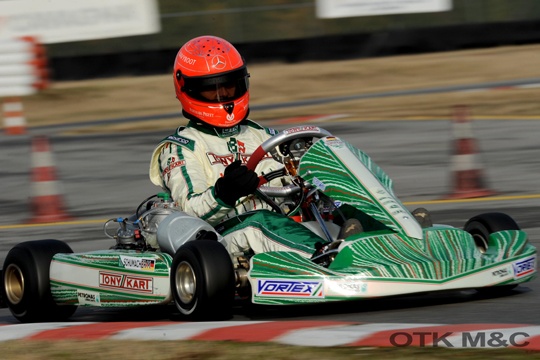 Our Racing Team’s activity began with two important test days held at the circuit of Lonato, on 23rd and 24th of January.
To celebrate the first 2013 test session of our Racing Team, there was an exceptional driver, Michael Schumacher. The seven-time F1 world champion was the absolute protagonist of two intense days at the driver of the new Racer EVK chassis, powered by the Vortex RVZ engine, just homologated. Schumacher, as he did already on last year, did not want to miss the first training test of our Racing Team and he attended the test session with his usual grit and determination, performing on many laps, fully cooperating with the team and signing best lap times! The test sessions at the South Garda Circuit were also performed by KF drivers, Karol Basz, Dalton Sargeant, Takashi Kasai and by the KF Junior category’s driver Mick Betsch. On this occasion also the World Champion for KZ class, Flavio Camponeschi got his debut. The support of Schumacher and of the experienced driver, teammate, Marco Ardigò was very precious to him to find out the secrets of the drive with the gearbox.

On next weekend we will at last see the Tony Kart Racing Team running an official competition, scheduled at the Italian La Conca circuit at Muro Leccese, for the first round of the WSK Master Series 2013. The competition will see at the track all drivers of KF and KF Junior categories, while to see KZ drivers in action we will have to wait for the Winter Cup at Lonato, on next February, from the 14th to 17th. The round at La Conca will be a test bench to determine the team’s competence in this time of the year and will be a further occasion for drivers to be running professionally. The new-arrived drivers, Basz, Betsch and Dalton had the opportunity at Lonato to get familiar with the Racing Team’s staff and to better understand the team’s working methods. All drivers said to be very satisfied with the workd done and also very excited for the opportunity they have had to share their first experience of the season with a very Champion!