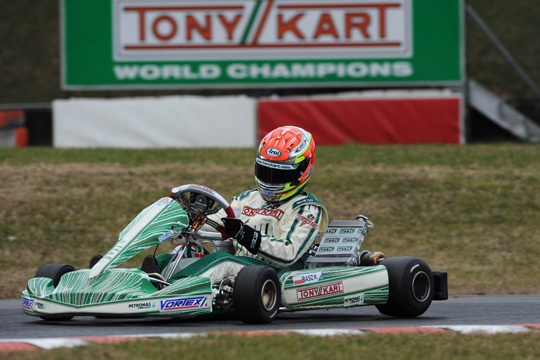 RACE PROGRAM. Our factory has in its own DNA a professional spirit, this way the race calendar our Tony Kart Racing Team will attend is including all the CIK-FIA event, starting from the World Championships for KF and KF Junior, scheduled on two rounds, and one single event assigning the title to the KZ1 category. In the race calendar is also present the European Championship for any of the categories as well as all the most prestigious CIK competitions, such as the Asia Pacific. Among other engagements we will attend, as previously said, the WSK Euro, some rounds of the Master Series and other important International competitions such as the Winter Cup, the WSK Final Cup and the Super Nationals USA.

KZ DRIVERS. With such a rich race calendar the Tony Kart’s management worked hard, lining up drivers of undeniable quality, with names known and very well integrated in our Racing Team already, which will be enlarged thanks to other talented drivers. In the category with the gear, we will have four drivers. Amongst them, the leader of the “Green” group twice World champion and four times European Champion Marco Ardigò who also came back on last November from Las Vegas with the title, and last but not least Champion of the WSK Master Series in KZ category. The other experienced driver is the Belgian Rick Dreezen winner of the WSK Euro 2011 and absolute protagonist of the Euro Series 2012, where he got the second place and two unmistakable victories
on the occasion of the first round in Sarno. Besides Marco and Rick we find two young drivers but with a good experience in the field and well determined, Mirko Torsellini and Flavio Camponeschi. Torsellini entered the Racing Team in the middle of the past season but soon gaining a fantastic success in the WSK Euro at Val D’Argenton. By this success and for his driving skills, he showed off to be one of the most relevant drivers of the category. Flavio Camponeschi represents the very newness among KZ category’s drivers; actually, after his World title in 2012 for KF1, Camponeschi will have this year his debut in the category with the gear facing a new fight.

KF DRIVERS. In the category without the gear, KF, there is the confirmation of two drivers, the Japanese Takashi Kasai and the Macao driver Andy Chang. Both have moved to Europe in order to better follow and train with the Tony Kart Racing Team, far from any inconvenience due to the long transfers to Asia. A decision that makes clear our drivers’ deep concentration and their willing to succeed. They both will attend their second season in KF category so they will be able to better take advantage of last year’s experience. Besides our quartet if official drivers in KF category are the Polish Karol Basz and the American Logan Sargeant. Basz is the very newness in our Racing Team since he never ran with Tony Kart material before, instead of Sargeant. Karol Basz was one of the absolute leaders in the past seasons of KF category, distinguishing at International level and always showing off high level performances. Basz is so longing to test and accomplish a further step ahead in 2013. On the other side, Sargeant comes from some very good seasons with the Ward Racing team, so he is in confidence with the Tony Kart-Vortex material already. The American driver is ready to face important rivals and to be reminded by passionate fellows for an important season. The Racing Team will line up in all its competitions also the very young German driver Mick Betsch, running for the Tony Kart-Vortex in KF Junior category. Betsch already had his debut with our Racing Team in 2012 and for the first time he will attend a complete Championship at International level, this year.

CHASSIS. “Weapons”, which revealed already to be winning, our drivers will be able to count on, are the Racer EVK and the Krypton KSK. New chassis will be powered, as in our tradition, by the very new Vortex engines recently homologated.