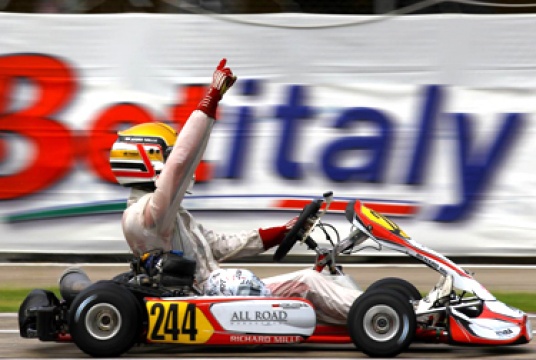 The 2012 season is progressing great for ART Grand Prix, and the positive results
keep coming for the French go-kart manufacturer. As the WSK Euro Series took off
last week at Sarno, ART and its drivers hit the top both in the KF2 and KZ1
categories.

The biggest achievement came from Charles Leclerc, who cruised to victory in the
KF2 final race. The Monaco-based driver, running for the ART Grand Prix Factory
Team, ended up on-top in a day conditioned by the wet weather. During the whole
race, he turned the fastest laps of the weekend, as a further confirmation of the
great feel established with the ART TS-01 – IAME Parilla package.
The KF2 category could have given more satisfactions to the team without some
unlucky breaks that prevented Ben Barnicoat and Niclas Nylund to express their
huge speed potential. Barnicoat suffered from mechanical issues in the pre-final
while he was in 5th place, and was forced to start last in the final. After proving to be
one of the fastest man on the day, he could have aimed to put his class to full
fruition on a wet racetrack.
It's been a pity, like for Nylund, who lost some ground due to some small but key
mistakes after having scored the best laptime in qualifying and starting from the
front row in the first race.
Ben Haney did not enjoy a better luck although he was set for an almost safe win in
KZ1 and provided the whole team with an impressive pace. The British racer
improved his performance, as well as the whole ART Grand Prix-TecSav over the
weekend. In the final, he moved past the leader, Dreezen, but slightly touched a
kerb in the process and the chassis sustained damage from the hit. Hanley then
started to experience a steering issue and lost any chance for fight for the lead,
wounding up in 6th place.
In the KF3 class, ART Grand Prix fielded 5 drivers: Yifan Xia, Lucas Marchi, Simo
Laaksonen, Olli Peltola and Takuya Okada. All of them continued in their learning
stage as they keep facing their first season in the category. They all showed great
improvements despite the tough weather of Sarno. The team is confident about their
growth, and sure that they will be able to fight at the top in the final stages of the
international 2012 season.
The Factory Team is now ready to approach the first round of the KF3 CIK-FIA
European Championship, scheduled at the French Varennes sur Allier track.


>> CHARLESE LECLERC:
“I'm really satisfied with how this weekend went and ended up. I've always had great
races at Sarno and with the tough weather we had the feeling has grown stronger
and stronger. The rain confirmed the good performance of our chassis as
demonstrated by our pole position. In qualifications I got a 10-second penalty but my
pace has been good and I recovered without big problems up to the second place in
the pre-final. At the start of the final I went behind Verstappen and started to
pressure him. When Max made a mistake, I went into the lead and never looked
back. We showed, and we have been supported by our laptimes, to have a superior
pace compared to everybody else and I won without having to take too many risks. I
want to thank the team, it's been a great weekend."


>> ARMANDO FILINI:
"The weekend at Sarno has been conditioned by the variable weather, which
conditioned the technical work by forcing us to keep changing the chassis set-up.
On the dry, the first feedback has proved positive, but then the rain started to fall.
We started from a pretty good base and never made some really big changes. That
enabled Charles to learn the track with the wet asphalt. The choice eventually paid
off because he kept improving each time he went on-track. Leclerc cruised to a
greatly-deserved win, a result that rewarded the team's work over the weekend. The
KZ1 class has brought the same positive feeling. Hanley did a great job in the final
as he passed Dreezen in the closing stages to hit the front. Unfortunately, a slight
jump on a kerb damaged the chassis and compromised the day's outcome. In KF3,
our fresh young drivers were forced to deal with a weather never seen before.
Despite all the issues they improved all the time. The huge potential showed at
Sarno is definitely promising for the next rounds."