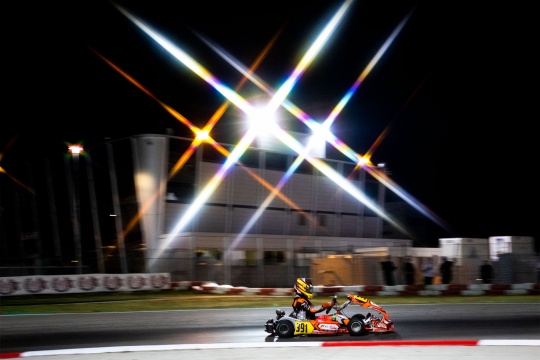 The night race at the Adria Karting Raceway brought a close to the first part of the season marked WSK Promotion, where Forza has shown significant progress. After the victory of Arvid Lindblad in OKJ at the South Garda Karting in Lonato, Dilano van T’Hoff brought home another trophy thanks to the 3rd place in OK.

Dilano van T’Hoff, P3 - The Dutchman confirms being team leader in Senior, and his weekend started with a P6 in Qualifying. After two heats completed in 5th and 3rd place, an inconvenience in the 3rd forced him to start from P10 in the Prefinal. Here, van T’Hoff finished 7th, gaining positions, but the masterpiece arrived in the Final where, from the 4th row, Dilano climbed to 3rd position, showing throughout the race a remarkable pace.

Gilles Stadsbader, P19 - Stadsbader, after returning from his break due to scholastic commitments, he used this weekend in preparation for the FIA Karting European Championship's last round at Le Mans on 21 July. After a slightly hesitant start, Gilles showed himself in the Final, recovering 6 positions to finish in P19.

Arvid Lindblad, P6 - After the victory at Lonato, Lindblad confirmed his good feeling with Forza Racing and with the Junior also at Adria. This decisive time was the change of pace on Saturday night where, thanks to a remarkable recovery of 8 positions in the Prefinal, he managed to gain the 4th row on the starting grid of the Final. In the latter, after battling for a long time with a large group of drivers, he finished in 6th place, also gaining 5th place in the championship.

Enzo Peugeot, P21 (+5 "penalty, P27) - At his debut with Forza Racing, the French driver came close to the top20, closing originally in 21st position. Peugeot, however, was subsequently penalized by 5" on the overall time of the race by the race commissioners for front spoiler release, which pushed him back to 27th place. The French driver will now have time to prepare for his home race in Le Mans.

Jamie Croxford, Team Principal: «It's always nice to see our colors on the podium of international competitions. There is no better promotion than results and, after some unfortunate episodes, our young drivers are bringing home a lot of satisfying results. Now we have three very busy weeks in France, at Le Mans, where the last act of the FIA Karting European Championship will be staged and before that the FFSA test race».
The team will be back on track this weekend at Le Mans for the FFSA French Championship race and the weekend of July 21st, again on the famous French circuit for the last act of the FIA Karting European Championship.

For the WSK races, on the other hand, it will be necessary to wait to October 27th for the first round of the WSK Open Cup in South Garda Karting in Lonato.
© photo: M.Perrucca