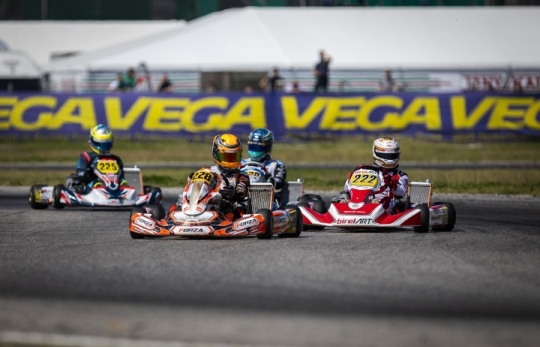 As at the WSK Super Master Series, the team was present with four drivers: Arvid Lindblad and Jonathan Weywadt in OKJ; Dilano van T’Hoff and Tikhon Kharitonov in OK.

OK - Kharitonov, what a comeback! Van T’Hoff deprived of success by an accident

Tikhon Kharitonov, P8 - The Russian made himself the protagonist of a weekend in progression that started with P21 in Qualifying Practices, a result improved to P12 at the end of the heats. The turning point, however, came on Sunday where Kharitonov, after the 18th place of the Prefinal, in the Final managed to race through the field to finish in the top10 – P8, in fact – gaining as much as 10 positions from his starting position.

Dilano van T'Hoff, DNF - The Dutchman's weekend started with a 6th place in qualifying, soon becoming P1 at the top of the heats where van T'Hoff won 2 fights out of 3. In Prefinal, starting from pole, Dilano was able to recover 7 positions after slipping to 8th, then finishing 2nd, proving once again he definitely has the pace to win. An accident at the start of the Final, however, put an end to his dreams of glory, forcing him to retire after a few laps.

Arvid Lindblad, P8 - The Briton, whose improvement compared to the Super Master Series round was significant, was the author of a great comeback; from his P20 in Qualifying Practices to close in P8 in the Final. A result conditioned by a 5-second penalty for spoiler release; Lindblad had, in fact, crossed the finish line in 5th place!

Jonathan Weywadt, P21 - The Dane, after missing the qualification for the Final 2 weeks ago, made it through during the first act of the WSK Euro Series. Weywadt, after the 28th fastest time in qualifying, finished 22nd in the manche and, at the end of the two Prefinals, made P16 place on the starting grid of the Final. A Final that saw him close 13th, result which then faded due to a front bumper penalty.

Jamie Croxford, Team Owner: «Although, once again, my boys have shown the right spirit in facing competitions of this level, I'm very bitter about what happened during the OK Final. Dilano had several important chances for victory, unfortunately frustrated by a reckless move by an opponent. Given the category, and age, some drivers would do well to understand that races don't last a lap, or a corner. But now it's important to regain focus ahead of the start of the FIA Karting European Championship.»

Forza Racing will be present at the Angerville round of the French championship to better prepare the first round of the FIA Karting OK & OKJ European Championship scheduled at Circuit Gabriel Thirouin on the weekend of April 21st.