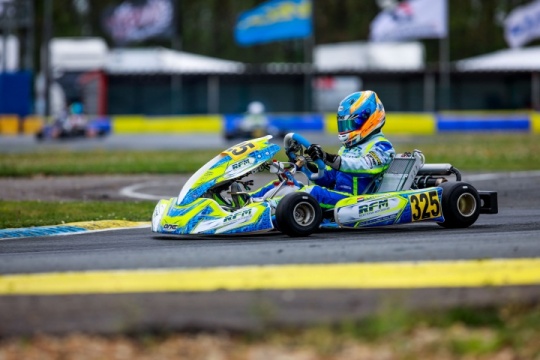 In France, after starting the event in P23 in the Qualifying Practices, van Hoepen changed course towards his weekend during the heats, where he climbed 9 positions to finish 14th.   Then, on the Sunday of Angerville, the Dutchman completed his oeuvre, first earning P10 in the Prefinal, which translated into 5th row start on the Final grid.

In the Final - red lights out - the Ricky Flynn team driver immediately flew into the top positions, fighting for a top 3 spot for a long time. In what was a chaotic finale, he crossed the finish line in 4th place, which then transmutated into a podium due to a penalty on a rival.

Laurens van Hoepen - (Ricky Flynn Motorsport): "These two weeks in Angerville have not been easy, yet I return home aware of my potential. As for the Euro Series race, beyond the podium assigned to me ex judice, what matters is the pace and behaviour we showed in the race. This, together with tenacity, will be the starting point for our future commitments.»

After the Angerville chapter, the next official engagement of Laurens van Hoepen coincides with the 2nd round of the European in Genk, that is the weekend of May 19th.