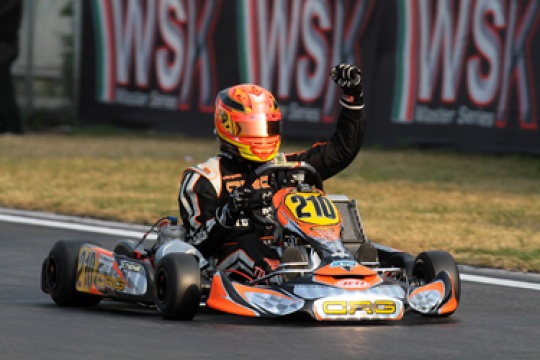 TIENE WINS DESERVEDLY IN KF2 AND BRINGS SUCCESS TO CRG POWERED BY BMB (ENGINES PREPARED BY KVS). IN KF2 LENNOX TRIUMPHS ON CRG-MAXTER, IN KZ1 TORSELLINI GRABS THE THIRD PLACE

Muro Leccese (Lecce- Italy). Awesome and winning debut of the CRG Official Team in the WSK Master Series for the race in la Conca which opens the season; all the top constructors and an army of 220 top drivers from all around the world in the KZ1, KZ2, KF2, KF3 categories, besides the young drivers of the Mini category.
The performance of the whole CRG team was outstanding. In Muro Leccese the team was present in KZ1 and KZ2 powered by the usual and performing Maxter engines, while in KF2 and KF3 the Italian constructor introduced the new BMB engines prepared by the Czech team KVS.

TIENE WINS IN KF2.  A resounding and deserved success arrived in KF2, where the CRG chassis - with the important help of the excellent BMB by KVS engines - occupied the top position of the category thanks to Felice Tiene's wonderful win after a gripping final, even though the Italian driver's leadership was never called into discussion. Tiene's success was completed by the third place conquered by the English Tom Joyner, on the LH chassis manufactured by CRG and powered by BMB as in the last Winter Cup.
So, Felice Tiene is once again protagonist in the KF category, where he confirmed to be one of the fastest drivers in the world, getting the best out of his performing CRG chassis, which was competitive in every sector of the track of Muro Leccese.

SUPER LENNOX IN KZ2. Another rewarding win for CRG was the one conquered in the final-2 by the strong Jordon Lennox-Lamb. His win in KZ2 with the Maxter engine directly prepared by the Italian manufacturer was flawless. He was at his second experience in KZ2 and showed some uncertainties only during the start. But, during the race, he was irresistible and he even achieved some great recoveries. 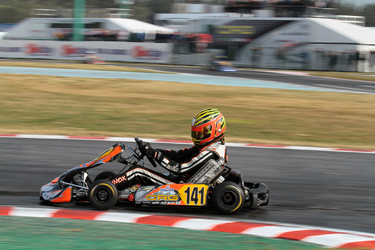 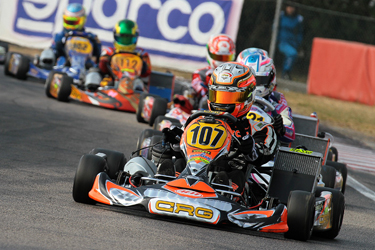 IN KZ1 TORSELLINI IS CONVINCING. In the top category, the KZ1, CRG smiles again thanks to Mirko Torsellini, at his first experience in KZ1. He grabbed an excellent third place in final-2 behind Kozlinski and
De Conto, at the end of a weekend spent always in the top positions.
CRG's other standard bearers gave the Italian manufacturer other reasons to be proud of. Jonathan Thonon, for example, did a great recovery from the last rows of the starting grid in final-2. Hemanaged to recover as far as the fifth place, placing before his teammate Davide Forè. Fabian Federer, on the other hand, finished a bit behind; he suffered from several troubles and ended up 13th. In KZ1, the CRG-Maxter team, 2011 World champion, is working on the details of its competiveness; the fastest lap achieved during the race by Torsellini in final 1 and by Thonon in final 2 are objective data that soon will bring CRG once again on the highest step of the podium in this category too.

IN KF3 PALOU EMERGES. CRG, in the weekend of Muro Leccese, got satisfactory results also in KF3 in the first out of three rounds of the WSK Master Series. Thanks to the BMB engines, the Spanish driver Alex Palou managed to find room among the best drivers: he placed second in the pre-final and went close to the podium in the final, where he placed fourth behind Ilott, Boccolacci and Russell. Also the American Santino Ferrucci did well, but his performance was eventually spoilt by a wrongstart procedure which put him out of the final.

THE INTERVIEW.
Giancarlo Tinini, CRG chairman: "Winning again in KF  was a great satisfaction for CRG and for Felice Tiene. Deciding to change the engine in the KF2 and KF3 categories has been tough, but we needed to completely understand what we lacked to be a competitive team. Now we are ready to turn the page and we are confident that not far in the future there will be some interesting progress. The victory in KF2 was a great satisfaction for the whole team and, of course, for Felice Tiene who deserved to win a race again. Lennox too did very well in KZ2, at his second experience in this category and immediatelywinning. In KZ1 we suffered a bit throughout the week because we could not find the right carburetion. We managed to find it in time for the final and, actually, things went decidedly better. Torsellini always had a good pace, even among the best drivers. Last year lots of people thought Torsellini was just a flash in the pan: on the contrary, here he showed to be a fast driver and his podium is well deserved. We stood some chances to achieve a podium also in KF3, but unfortunately Palou made a couple of mistakes because he wasn't able tohold his enthusiasm and anyway we came close to this goal too."

Euan Jeffery, CRG Sports Manager: “It was a good weekend for all the categories. All the CRG drivers were fast. In KF2,KF3, KZ2 and also in KZ1, despite this last category did not go as we expected, leaving aside the podium achieved by Torsellini. Anyway, there was a high level of competitiveness: Torsellini and Thonon did the fastest lap in the two finals, and also Forè's perormance was good, as well as Federer's, even though the latter had more troubles. In KZ2 Lennox was very good throughout the weekend, while in KF2,with the BMB engines by KVS, Tiene's and Joyner's results were outstanding.Palou did well in KF3, while Ferrucci was really unlucky to be disqualified at the start in the pre-final, but also the American driver's performance was good."
Felice Tiene (KF2): “It was a beautiful win. I had to fight hard because Max Verstappen drove fast, but winning in this way is much more exciting. I'm really happy because we showed that CRG can win in KF too. The chassis is excellent, and I must say thank you to KVS because their engines go really fast. In the pre-final I preferred waiting a bit before taking the lead , even though I was faster than Max. In the final I immediately took the lead then, in the last laps, I went faster and I finished with a good lead over the others. I'm rather optimistic about the season. Now we are all set up."

Jordon Lennox-Lamb (KZ2): “This second experience in KZ2 was really positive. We showed the excellent competitiveness of the Maxter engine directly prepared by the constructor. I still need to improve my start, but I had fun in the race. I was fast and I won effortlessly."

Mirko Torsellini (KZ1): “It was my first race in KZ1, and after all I'm satisfied. It is a bit complicated running in this category. There are manydrivers with greater experience than mine and the level is much higher thanlast year's. In KZ1 there are drivers who have won more than one World and European championship. It is not easy to fight against these champions. That's why I'm really happy of my third place."

Jonathan Thonon (KZ1): “My final was awesome! I started last and recovered as far as the fifth place. It was so thrilling, all those overtakings. Eventually, I did the fastest lap with several tenths of a second less than all the others. This means that, in the end, after a difficult beginning, everything was perfect, from the chassis to the engine and to the kart setup. Finishing with such a lead in the lap is a very good signal. Anyway, I'm happy for the podium obtained by CRG in KZ1 with Torsellini, who had already showed what he was capable of in KZ2 last year."

Davide Forè (KZ1): “This weekend had begun very well. I was very fast in the time trials, then I had a problem with my engine in the first Saturday final. In the Sunday final I started from the 12th place and arrived 6th. I think I did a good race. Since the beginning of the weekend had been so good, I must confess I expected more, but in the end I'm satisfied. I'm also glad for the excellent results got by CRG in all the categories and, in Sarno in two weeks, I think we can do even better."