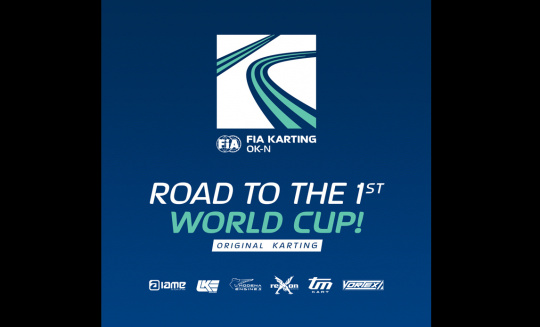 Press Release by: FIA Karting
During the awards ceremony for the 2022 FIA season, the President of the FIA Karting Commission Akbar Ebrahim reminded us that karting is an essential step for drivers wishing to gain experience at an early age with the ambition of developing later in motor sport, as well as being a discipline in its own right that is widely practised by many drivers throughout the world.
The spirit of openness towards greater diversity that currently guides the FIA is also found in karting, in particular through the launch of the OK-N and OKN-Junior aimed at making this discipline more accessible in all countries while maintaining international status. The "Road to the World Cup - OK-N" will be organised this year alongside the FIA Karting World Championship - OK and OK-Junior in October 2023 in Franciacorta (ITA), as a prelude to the first FIA Karting World Cup - OK-N announced for 2024.

A coherent technical and sporting framework at national level
Mini, OKN-Junior, OK-N and KZ2 offer a complete range of categories from the age of eight upwards to allow the greatest number of drivers to compete in national championships, with equipment that is open to competition and allows reasonable and controlled budgets. The FIA Karting Commission has reviewed the competition format to return to the origins of karting. The recommendation formulated by the FIA Karting is to organise a national event over a maximum of two days with the use of a single chassis, a single engine and a set and a half of tyres.

One engine for two age groups
A simple and economical solution has been chosen to develop a Junior version of the OK-N. A 26 mm flange on the exhaust differentiates the OKN-Junior from its elder OK-N. The engine itself is strictly identical, as well as the carburettor and the exhaust system.

Approved carburettors at low prices
The OK-N regulations allow National Sporting Authorities to choose between bowl and diaphragm models to best suit their competitors' needs. The approved carburettors for OK-N and OKN-Junior are offered at the same preferential price of €200 (excluding VAT). Tillotson has homologated a 30mm bowl carburettor for OK-N, the FM 30, as well as a 24mm diaphragm carburettor, the HW 49, alongside the OK-N 01 from HHC and the N1 from Va.Mec/TM Kart.

Six manufacturers involved
Four engine manufacturers have been involved in the development of the OK-N and OKN-J: IAME, Modena Engines, TM Racing and Vortex. They were joined at the end of 2022 by LKE and Rexon Motors, to offer a wide range of possibilities and guarantee healthy competition in the interest of the competitors.

Ready to go
2023 is about to see the launch of the OK-N and OKN-J in several countries. Although eyes are already on Italy to discover the potential of this new direction, other countries such as Denmark, Australia, France, Poland and Spain are also on the list for this inaugural season.