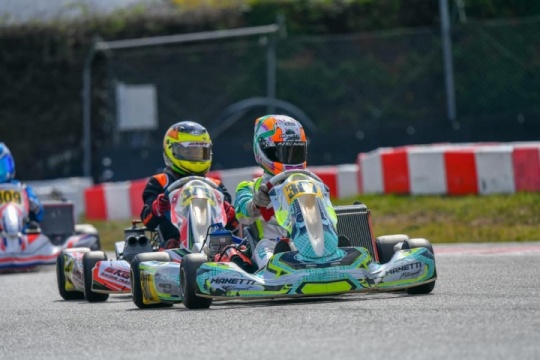 Press Release by: Manetti Motorsport
The South Garda Karting weekend saw the team involved in the 30th edition of the Margutti Trophy.
The now historic trophy was well honored by all participants in the many categories competing in Lonato. Manetti Motorsport was present with two drivers in KZ2, two in OKJ and one in 60 Mini.

In the event's premier class, Luca Bosco and Francesco Pizzi fought – as always - for the leading positions in the class.

Luca Bosco completed yet another competitive solid weekend that bodes well for the rest of the season. Bosco built up a good weekend right from qualifying, which he completed with P21 overall, sixth in group A. The three heats available then saw the driver make P10 and P11, complicated by a penalty in the second heat but anyway sufficient to confirm qualification to the KZ2 Final. During the pre-final, useful to decree the main event's starting order, Bosco was involved in a contact which put him out of the race. A result that could have cost the driver Manetti Motorsport dear, but he then managed to climb back into the Final with as many as 17 overtakes and P17 at the finish line. Once again, Luca Bosco has shown he can definitely race with all the category's best and fight in a tough mid-field, useful for his course of development.

Luca Bosco: "I'm really happy about this weekend. As I said at the first interview, I'm slowly getting there too. I qualified 22nd out of 70 drivers confirmed, considering that I also had a five-second bumper penalty at the last heat. In the Prefinal, unfortunately, there was someone behind me who made a mistake changing gears and I found him practically on top of me. Anyway, in the final I really enjoyed myself; starting, I climbed 17 positions thanks to a perfect engine and chassis! Thanks Alessandro Manetti as usual, Vortex, Teknoteka and Panta Fuel and all of my sponsors!"

Bad luck, instead, for Francesco Pizzi, again competitive after the good performance of Sarno but penalized by a not optimal qualification. The Italian, ninth in group C, was forced to recover in all the heats, incurring a few penalties that led to missing the direct qualification for the Final. Pizzi, however, did not lose heart fighting even in the repechage of KZ2, where he snatched a P8 finish.

Francesco Pizzi: "Unfortunately this week we weren't able to reach our objectives following a problem in qualifying that made me start from the back; in the comeback I encountered penalties that didn't allow me to enter the final. In the repechage, I made some mistakes that unfortunately denied us entry into the final."


OKJ - Lola Lovinfosse and Gaia Bernasconi on the attack in Junior

In OKJ, all feminine hopes were placed in the hands of Lola Lovinfosse and Gaia Bernasconi, the protagonists of two excellent results.

The French driver proved she could fight in the category's top ten with a weekend she passed with flying colors. Lola Lovinfosse, P21 overall in qualifying and P7 for group C, then gave her best in the category heats, closing in P8 overall with a sixth and an eighth place. The excellent results then allowed Lola to qualify directly for the Final, where she recovered four positions and finished in P8 at the finish line.

A little more trouble for Gaia Bernasconi during the Lonato weekend, starting with the eleventh time in group A and a bit of bad luck in the heats thanks to a retirement and an 18th place. The Swiss driver was then perfect in the repechage, managing to qualify for the final, then giving clear proof of her driving skills in the decisive race with eleven overtakes and a final P23.

Gaia Bernasconi: “The weekend had a positive start, on Thursday and Friday morning on a wet track I went very well. During qualifying on a dry track, I didn't feel good and I couldn't do my best. In the heats I was very positive but unfortunately in round 1 I was forced to retire due to a contact. During the repechage I did not warm up the tires well in the launch lap and at the first corner I arrived long but I still managed to go to the Final stage.In the pre-final I had to retire, again for a contact! Fortunately, the final was positive, from p34 to P23! Over the weekend I was unlucky, we could have done much better, I have to hold on a little longer because I know that the results will soon arrive.
My next race will be the 5th in Castelletto di Branduzzo for the x30 italy!
I want to thank my family who supports me at every race, my team for the great material and the good work!”

In 60 Mini, it was a difficult but instructive race for the young Bulgarian Kaloyan Varbitzaliev, eleventh in group B after qualifying and, alas, out of the final with 28th and 20th place in the heats. Varbitzaliev then attempted access to the final, denied by a repechage wherein he concluded out of the rankings.

Manetti Motorsport will be back on track in Angerville for the first round of the FIA OKJ European Championship with Lola Lovinfosse.