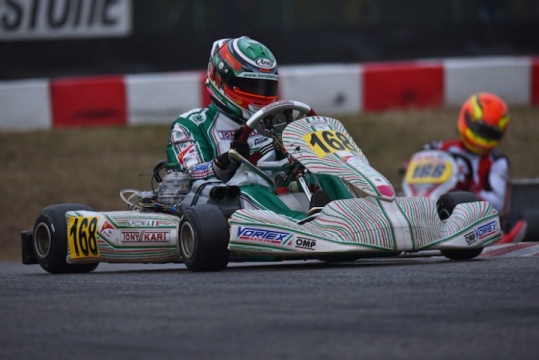 Author: Vroomkart International
Alessio Piccini takes a look at this first part of 2018.
Now that the WSK Super Master Series has come to its conclusion, it is time for a half-season report card for the drivers of the international karting scene. Alessio Piccini certainly feels he's passed based on his competitiveness and his Tony Kart / Vortex Factory vehicle, but because his results were heavily influenced by misfortune, a final judgment shall have to be postponed.

During the Winter Cup, for example, a weekend made difficult by the weather conditions, and the 3rd of the Super Master Series in Sarno, where a mechanical failure in the Prefinal stole his chances at an important placement in the Final, Piccini did not take home as much as he actually deserved.

"The season started well with the 5th place in Adria in the first of the Super Master Series," Piccini said. "Even at the Winter Cup we were always very competitive. Too bad for the final result, 13th position, which hardly reflected what my and my team's potential was."

"The Southern triptych didn't start as we expected. In Muro Leccese we struggled a bit and the crash in the Final while I was close to the top 10 put a full stop to the weekend. In Sarno, instead, we found that extra edge we lacked in Puglia. Especially in the Easter race we were always close to the frontrunners and with the damp in the Prefinal the feeling was really good. Too bad for the technical problem that took me out of the game. However, the good recovery in the Final remains, where I made my way from the 14th row to the 13th final position. Now it's time to recharge the batteries and prepare the best we can for the European KZ2 season, which I'm really counting on," he concluded.