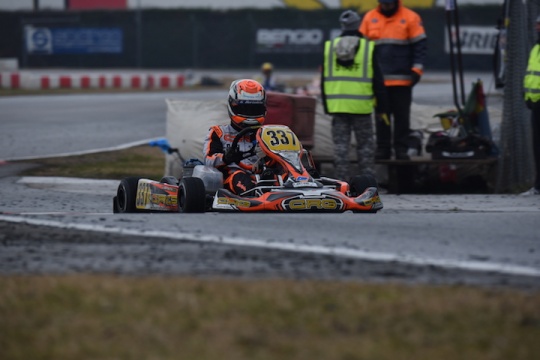 Author: Vroomkart International
Gabriel Bortoleto talks to Vroom about the first part of his 2018 in OKJ.
Among the OKJ front-runners in 2018, we can't fail to mention CRG official driver, Gabriel Bortoleto, who's carved out a leading role for himself in the category he's running in.

Fast and skilled in overtaking, a bit unlucky in a few crucial moments, Bortoleto has always appeared to hold his own in WSK races, especially in the Super Master Series where he is currently 2nd in the rankings, and in the "trophies" of Lonato or the Winter Cup, where unfortunately he was forced to immediately raise a white flag in the Final, and the Margutti, where he completed the CRG duet behind Enzo Trulli.

Still missing an outright win, in this Easter's WSK Super Master Series in Sarno, it might well be his moment with his putting in the best time in Qualifying Practices.

"On the whole, the first part of my 2018 is certainly positive"commented Bortoleto. "In the first outings it was a bit hard for me, but with time we settled down and we took home some good results".

"At Muro Leccese we finished in 2nd position and this gives me the chance to win the championship. The fact that everything is going in the right direction encourages me" he concluded.