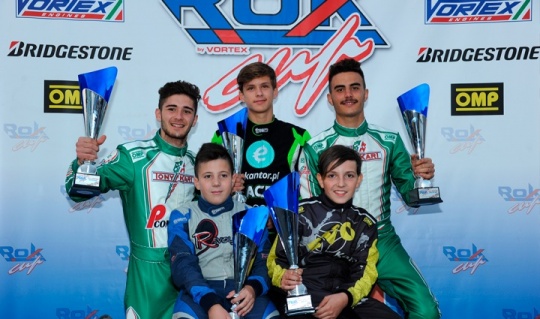 Press Release by: OTK Kart Group
Warm and spectacular day today in South Garda. With the qualifying and the heats ...
Warm and spectacular day today in South Garda. With the qualifying and the heats the first leaders emerged.
Let's find out who they are.
At the end of a sunny day, racing with temperatures close to 23°, the five fastest Rokkers have been awarded. The polemen Federico Cecchi (Junior Rok), Danny Carenini (Senior Rok), Paolo Gallo (Mini Rok), Danilo Albanese (Shifter Rok) and Giuseppe Gaglianò (Super Rok).
We underline that Cecchi, Carenini and Albanese have already been international champions at least once. In the heats the figures were confirmed only partially ...
SENIOR ROK.
It is all of the Szysko brothers the scene of the day. Maciej signs the pole and wins the first heat (A-B), Szymon does not want to be no less than his brother and immediately centers a double win in the remaining heats.
Also the other Polish drivers perform very well in the first heats, Szczurek and Mila, as well as the Italians Cicognini, Carenini and Costantini. On top of the charts we also find the two brothers Muller, Michael and Tanja. The latter was good at obtaining a good second place in the A-E heat.
MINI ROK.
The poleman is the Italian driver Gallo, who also wins his first heat (A-B), however the competition is very hard and also Kucharczyk and the two children of art Trulli and Badoer performed excellently and won. The success has been achieved by the Russian Zhivnov and the Italian Bedrin, confirming that the Mini Rok is really unpredictable for the finalists’ selection, from an entry-list of 162 drivers.
SHIFTER ROK.
Albanese and Squaranti have won the two races of the day, with the first who also took the pole position trophy home.
The young Guidetti, Bonfanti, Comanducci and Luyet have made a great impression, but for the fight for the international title they will surely have to face the champion in charge Marcon and the Swedish Milell.
Among the drivers who can emerge, a special eye should be turned to Cinti, Zani and to the Big, Rubens Barrichello, author of a super-recovery in a heat (A-B).
JUNIOR ROK.
The Mini Rok international champion, the Italian Cecchi, jumps very strong and signs the pole winning the first heat (A-B).
The other heats went to the experienced Italian Rokker drivers, such as Fusco, Bosco, Franzoso, Sabella and Pizzi.
Many other Rokkers have been racing at the top already and tomorrow will be among the leaders, in particular we recommend not to miss Janicki, Morgatto, Villa, Caglioni, Cordera, Famularo, Bernardi, Grinbergas, Albanese, Placa and Feeney.
Photo OTK M&C

Vortex ends the WSK Super Master Series with a flourish