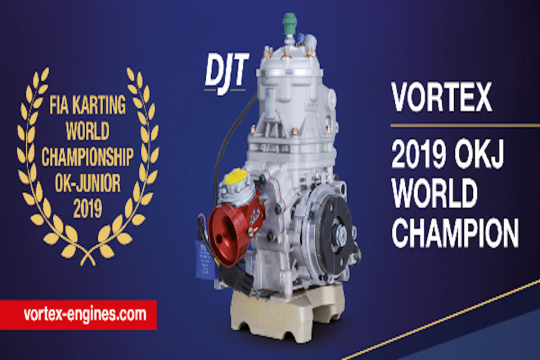 Press Release by: OTK Kart Group
The season just ended has really been rich in prestigious victories for Vortex, World champion in OKJ and always playing a leading role throughout the year and in all categories. A year studded with podiums and big satisfactions.
With the last races run between the USA and the East, the 2019 season of the international karting is coming to an end. A season that Vortex lived as absolute protagonist, leading lots of prestigious races throughout the year. From the OKJ podium to the WSK Champions Cup in January, conquered by Ten Brinke (Ricky Flynn Motorsport), to the hat-trick in the Macao International Kart Grand Prix in December, these were 12 months full of challenges and successes, gained in different categories and contexts: clear proof of how our engines are able to adapt at best to any situation.

Still speaking about world championships, we almost win in KZ2 too: at the FIA Karting World Championship in Lonato, actually, David Vidales (Tony Kart Racing Team) finished second in a race where he carried out an excellent comeback.

The third step of the podium, instead, is the one conquered by Harry Thompson (Ricky Flynn Motorsport) in the FIA Karting World Championship of OK, in Lonato too.

Vortex has also been in the fight for European titles, winning, in the end, the second place in the FIA Karting European Championship in the KZ class with Lorenzo Camplese (SC Performance), and the third in the OKJ class with Ten Brinke.

Concerning the races on the WSK Promotion circuit, we have put our seal on this field too: the double win of the KZ WSK Euro Series, won by Marco Ardigò in front of Simo Puhakka (both Tony Kart Racing Team) is actually sealed by Vortex. In the same Euro Series, but in OK, it was Dino Beganovic (Ward racing) who gave Vortex the ACI Karting Italian Championship, whose rating was based on the results of the WSK Euro Series raced in Italy.

Triumphal, finally, was the WSK Final Cup in Lonato of the OK class, in which our engines proved all their performance and reliability, finishing first, second and third with three Tony Kart Racing Team official drivers: Pedro Hiltbrand, Joseph Turneyand Lorenzo Travisanutto.

The latest successes came from the prestigious competitions outside Europe. First Daniel Formal (Leading Edge) brought our engine to the top of the KZ class in the SKUSA SuperNats in Las Vegas; then, as already mentioned, the hat-trick of the Macao International Kart Grand Prix KZ2, with Simo Puhakka, Matteo Viganò and Alessio Piccini (Tony Kart Racing Team) monopolizing the podium, put the Vortex seal on the 2019 season.

In total, considering only the WSK and CIK-FIA finals (excluding the results in the ratings drawn up on different heats), in the 2019 season Vortex conquered 11 victories, 17 second places and 21 third places. Definitely, like a movie title of a few years ago: “A Good Year”.