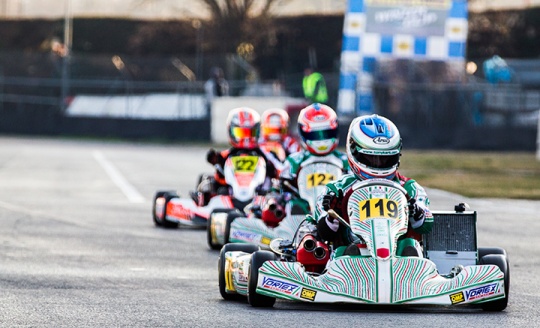 Press Release by: Tony Kart Racing Team
The 2017 season of the Racing Team begins in Adria with the WSK Champions Cup.
Just little time now remains before the beginning of the 2017 season of our Racing Team. After attending an intensive three-day test session on the South Garda circuit, with all our drivers, we are now ready for the first event of the season, WSK Champions Cup at the Adria Karting Raceway, from 26th to 29th January.
The Adria competition, scheduled on a single round, will be the first opportunity to deal with the most talented rivals and to see our new drivers in action. Matteo Viganò, Pedro Hiltbrand, Gianluca Petecof, Viktor Gustavsson and Andrea Antonelli. Next to the new arrivals there will be, confirmed for this season again, Alessio Piccini, David Vidales and Clément Novalak.

Marco Ardigò and Luca Corberi will make their seasonal debut on the occasion of the forthcoming events. Both drivers and staff are eager to test and see on track the qualities of the Racer 401 S and Krypton 801 S.

The race can be followed entirely in live timing and the finals, as all the major international events, will be broadcast in live streaming.