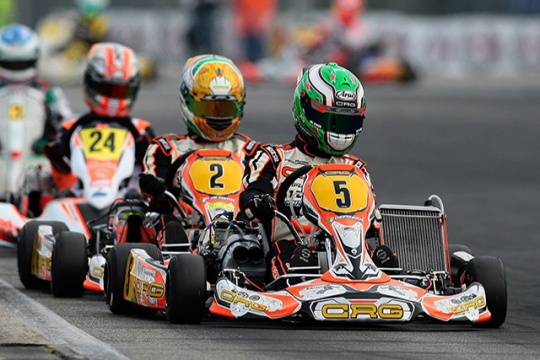 CRG will get to Essay with its full lineup for both shifter categories, a territory where the Italian outfit has always displayed a great competitiveness, as witnessed by the hall of fame: the Tinini Group has in fact secured 20 titles in the European Championship so far.

HUNTING A GOOD RESULT IN KZ

CRG Holland will field the strong Dutch driver Jorrit Pex, who secured the title of 2015 KZ World Champion and that of KZ2 European Champion in 2012, while 2014 European Champion Andrea Dalè and the French Julien Deharte will get on track with private teams.

A STRONG LINEUP ALSO IN KZ2

CRG lot for KZ2 is also quite strong and numerous. The works team will in fact comprise the Japanese Fuma Horio, Fabrizio Rosati and the American Sting Ray Robb, all on CRG-Maxter.

Team CRG Keijzer Racing will field the Dutch Dylan Davies, while CRG Holland will line up the Dutch Stan Pex, who is ready for hitting the big target, and the Swedish drivers Benjamin Tornqvist and Andreas Johansson. KZ2 European Champion of 2011 Fabian Federer will drive for team SRP, the Spanish Enrico Prosperi for Renda Motorsport and the German Dominik Schmidt for TB Motorsport.

THE PROGRAMME OF ESSAY'S WEEKEND (GMT+2)

Live Timing, TV Live Streaming and all results will be available at www.cikfia.com