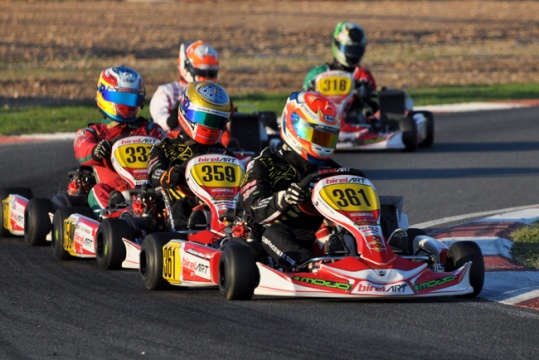 Author: Vroomkart International
Team UAE drivers Sanad Al Rawahi and Piers Pakenham-Walsh were the best performers on the final day of the 2015 Rotax MAX Grand Finals in Portugal...
... while their teammates suffered a myriad of misadventures on an action packed last day of action at Kartodromo Internacional Algarve on Saturday.


Al Rawahi started from 13th on the grid but was involved in first lap chaos, which saw him drop to near the back of the field of 34. But he recovered well and during the second half of the race was one of the fastest drivers on track - only the winner set a quicker lap - as he powered to sixth place and his best showing in a Grand Finals.
Al Rawahi said, "I am very pleased with this result as it is payback for the hard work we put into our racing programme. I want to thank my father for making this happen, my brother for his support, my crew who provided me with a good kart and everyone in Team UAE."
Pakenham-Walsh recovered from 29th on the grid, made a good start and kept out of trouble, to claim a well deserved ninth place as he slugged it out with the world's best Rotax drivers. The result a just reward for the Dubai based driver who endured a challenging time in the Heat races and the Pre-final, but he rose to the occasion in the best way possible.
"I can't believe it!" said Pakenham-Walsh when he was told he finished ninth. "The engine I had was not the fastest, but I gave it all I have and am very happy to be in the top ten. Big thanks to my family, my mechanic Tom Holland and Team UAE for a great effort. I am very, very happy."
It was bitter disappointment for Luke Varley who never put a foot wrong all week in the DD2 class, winning two of his Heats and finishing second in the Pre-final.
In the Final, starting from second on the grid he was swamped at the start and overtaken by several drivers. Nevertheless he recovered well and started picking his way to the front, but while battling for third he tangled with a slower driver and was forced to retire from the race.
Hungarian driver Ferenc Kancsar won the race to claim the DD2 world title.
Both Team UAE drivers in the MAX Pre-final had a morning to forget as they were embroiled in battles that saw them drop down to the tail of the field with Tom Bale and Abdullah Al Rawahi finishing 20th and 26th.
In the Final they both fared better with Bale crossing the line in 16th and Al Rawahi 21st, with Italian driver Alex Alex claiming the MAX world title.
Taymour Kermanshahchi was the only Team UAE Junior driver in action on the final day. He made a good start and was running strongly early on in the Pre-final but was involved in an incident which earned him a penalty from the Race Stewards which relegated him to 30th on the grid for the Final.
From that point on UAE Junior MAX Champion's Final race was comrpomised and although he was making his way up the order in the Final, he was bumped by a rival which again dropped him down the field to last. He crossed the line in 28th out of 34.
Frenchman Florian venturi emerged on top after a tense six kart battle for the lead to be crowned the Junior MAX world champion.
The drivers representing Team UAE at the 2015 Rotax Max Challenge Grand Finals are:
Junior MAX - Amna Al Qubaisi (Leading Junior MAX Emirati National)
Junior MAX - Taymour Kermanshahchi (UAE Junior MAX Champion)
MAX - Tom Bale (UAE MAX Champion)
MAX - Patrick Hannah (UAE MAX Runner-Up)
DD2 - Piers Pakenham-Walsh (UAE DD2 Champion)
DD2 - Luke Varley 2009 MAX World Champion, Abu Dhabi Racing)
DD2 Master - Jonathan Mowatt (UAE DD2 Master Champion)
DD2 Master - Tony Hogg (UAE DD2 Master Runner-Up)
DD2 Master - Hussain Umid Ali (Oman DD2 Master Champion)
Oman drivers affiliated to Team UAE:
Abdullah Al Rawahi (MAX)
Sanad Al Rawahi (DD2)