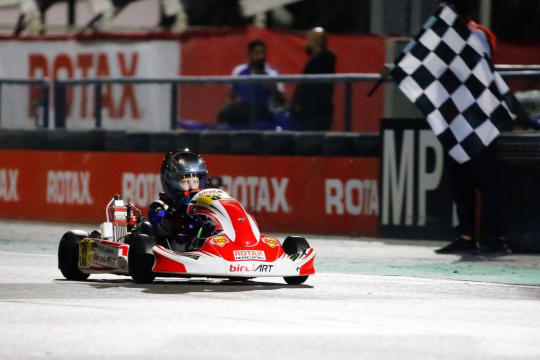 The first final of 2021 goes home to Japan with the last breath victory of Arata Endo. Tight fight already during the first laps with Endo at loggerheads with pole man Borys Lyzen. Despite taking the lead on the second lap, the Japanese driver had to give way to his rival shortly afterwards, until one lap from the end. Beautiful fight between the two with Endo able to take the lead at the last chance crossing the finish line with +0.116sec of gap. Silver medal then for the Polish Lyzen, third the English Scott Marsh with nine positions recovered from the start.

Three changes at the top to assign the last title of the Mini sector. It was the Estonian Nikita Ljubimov to become champion but not without effort, thanks to the rivalry with the driver from the Czech Republic, Zdenek Babicek in the lead in the first part of the race. A tough battle in this case too, with the Estonian getting the better of the situation from lap 5 until the chequered flag. The podium was completed by Manuel Minguez Gayoso for Spain and Dragos Avasilcutei for Austria. Babicek's fate was worse, only sixth at the end.

Undisputed domination for the Latvian Tomass Stolcermaniss in the Junior category, pole man and then winner without any doubt. Stolcermaniss was able to keep his Dutch rival Jayden Thien at a distance, with a gap of almost one second. Third place went to the Belgian Kai Riallerts, who fought with Thien until the end.

The French Oscar Pellemele took the E20 category, keeping the starting pole position for the 12 laps foreseen. Second and third place went to the Swedish Hanes Morin and the Polish David Aluejtner.