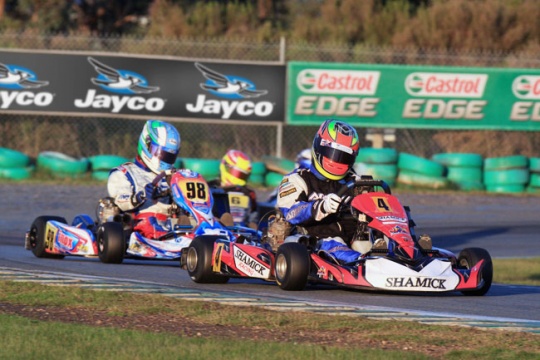 Press Release by: Karting Australia
Australia’s most recognised brand of Caravans and recreational vehicles, Jayco, has joined as a co-presenting partner of the Australian Kart Championship that kicks off next weekend (April 3-5) in Melbourne.
The Australian-owned and operated business will join long-term karting supporter Castrol EDGE as a co-presenting partner of the new-look Championship in 2015 as a part of a three-year arrangement.
Karting Australia Chief Executive Officer Kelvin O’Reilly believes the involvement of Jayco as a co-presenting partner alongside Castrol EDGE for the Championship is a notable boost for the sport across Australia.
“Throughout the past 18 months we’ve positioned Karting as a sport that has a clear direction and also provides a strong platform for potential partners to be a part of,” said O’Reilly.
“This year’s Australian Kart Championship is gearing up to be a significant success and with the involvement of Jayco alongside Castrol EDGE as a presenting partner we are looking forward to providing the sport with a very bright future.
“Jayco and Castrol are both leading brands in their respective industries and we’re delighted to have their support of Karting.”
The partnership of the Australian Kart Championship, alongside a major partnership of the Confederation of Australian Motor Sport (CAMS) and the CAMS Formula 4 Championship emphasizes the support of Australian motorsport by Jayco.
Jayco Chairman Gerry Ryan believes the partnerships are good fits for the brand, to be supporting young talented Australians aspiring to be the best that they can be on the world stage.
“Jayco is a very proud supporter of Australian sport, so when the opportunity arose to support CAMS, Australian motor sport and young Australians, we simply could not say no,” said Ryan.
“This is an investment in the future of Australian motor sport as the stars of tomorrow will come from karting and the new CAMS Jayco Formula 4 Championship.
“At Jayco, we have a great range of products that are perfect for families who enjoy motor sport, whether they be travelling to compete in karting or at club level or fans camping at major events, so these partnerships will be really beneficial from a business perspective too.”
More than 240 entries have been received for the opening round to be hosted by the Go-Kart Club of Victoria in Melbourne next weekend (April 3-5).  This round will feature more individual drivers than the single-event National Championships held in Newcastle last year.