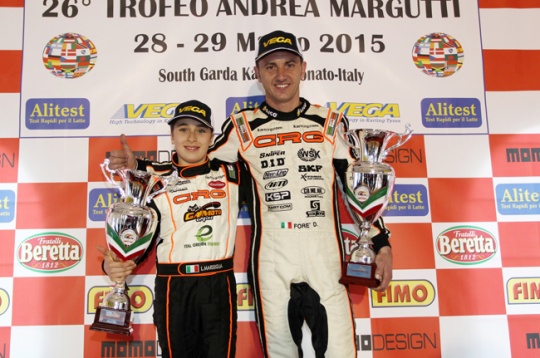 Press Release by: CRG
Davide Forè obtained a spectacular victory in KZ2 at the South Garda Karting of Lonato, on CRG run by Renda Motorsport, and added his name to the prestigious Hall of Fame of the Andrea Margutti Trophy.
Another success for CRG came from Mini with Leonardo Marseglia and team Gamoto.
Stunning Davide Forè! The Italian driver of CRG bettered all rivals and got a strong victory in a Final of the 26th Andrea Margutti Trophy that has been very tight until the flag. This great result obtained at the South Garda Karting of Lonato allows the Italian to add another prestigious prize in his long career, which confirms the competitiveness of a victorious chassis of the likes of CRG's.

It has unquestionably been a great performance the one put in by  Davide Forè that made the 26th edition of the Andrea Margutti Trophy, race organized by Parma Karting in the memory of the young driver Andrea Margutti passed away early in 1989, even more precious.

Davide Forè had a crescendo of results in Lonato on his CRG-Tm kart run by Renda Motorsport. He clinched the victory in the Prefinal after a lively positions exchange with Alexander Schmitz (Tony Kart-Vortex) and Massimo Dante (Maranello-Tm) and then kept his momentum in the Final after taking the lead of the race early on and keeping it all the way until the end of the 25 laps.

CRG's success at the 26th Andrea Margutti Trophy was also rounded up by the victory of the very young Leonardo Marseglia, on CRG-Tm run by team Gamoto, who has been an excellent protagonist of 60 Mini putting in a spectacular winning performance in the Final. Marseglia turned out to be among the quickest throughout the weekend of Lonato. In fact, he set the quickest time in qualifying, took victory in the heats and was second at the sprint to the line in the Prefinal.

Soon after crossing the finish line, Davide Forè appeared to be very happy and emotional for this win: “This is my first victory at the Andrea Margutti Trophy, a result that was still missing from my prize list and I am happy on achieving this result with CRG. We have been quick for the whole weekend even if we knew it would have not been a walk in the park, as something was still missing to get the optimal performance. We have always believed we could get to the win on the distance, and tried to remain among the front runners since the heats, keeping an eye on Schmitz who has
been really very quick and my main rival in this occasion. I think getting the lead and managing to show my race pace with a few meters of advantage to the rest of the group has played a major role. I believe we did a great race. I needed a very important result, it is a good moment for me, as the recent races went very well. Victories never come alone though, this is why I would like to dedicate this victory to the whole CRG Group and to Renda that gave me this material, to CRG's President Giancarlo Tinini, who allowed me to take part in this race, and to the whole mechanics that helped me. Let's hope this is the beginning of a long list of victories for the whole CRG Group in this year too.”

Complete results of the weekend are available at  www.trofeomargutti.com