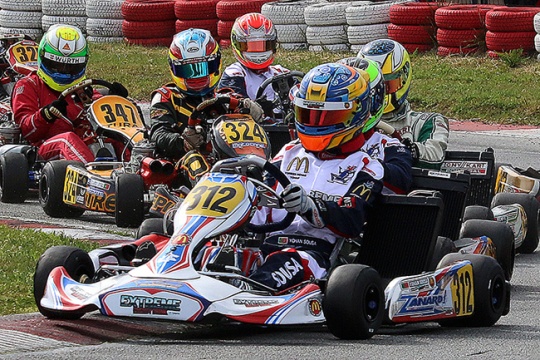 Sousa unstoppable in X30 Shifter
Yohan Sousa (312) - who was the fastest in qualifying and won second qualifying race - did not waste the pole position for secured the top spot of the podium in Final 1 as well as the Final 2. Lucas Araujo, who won the first qualifying race was second in the Final 1 and 2 and Rui Carneiro completed the podium.
In X30 Shifter Master - aimed at pilots aged less than 32 years - Nuno Silva (317) won the duel with Frederico Castro and Adelino Sequeira completed the podium. Rui Bastos secured fourth place and Antonio Rodrigues closed the top-5.
In Final 2, it was António Rodrigues (373) who won, resisting Rui Bastos and Nuno Silva attacks that completed the podium. Frederico Castro and Antonio Bravo Lima were the fourth and fifth.

Amaral defends legacy brother Jorge in X30 Senior
João Amaral (212) won in Viana do Castelo the two finals of X30 Senior defending the legacy of his brother Jorge, last year’s champion.
After being fastest in qualifying and have won the two qualifying races, Andriy Pits maintained a very strong progress in the Final 1. However, a few laps to go, the pilot from Leiria who debuts this year in the class had problems and finish third.
João Amaral, who always raced in second position maintained a strong pace and turned out to be the first to see the checkered flag, while Ricardo Borges, also very fast, completed the podium. In Final 2, João Amaral came back to win, Andriy Pits was second and Diogo Pinto very fast was third.

Pires grabs two wins in X30 Junior
First in qualifying and second in both heats, Mariano Pires (184) managed to beat all opponents in Final 1. Diogo Costa Pinto ran in second place, but then Bruno Ponte overtook him keeping the position till the end, ahead of the driver from Arruda dos Vinhos who completed the podium.
Final 2 was a copy of the first with Mariano Pires in first position. Bruno Ponte guaranteed second place and Diogo Costa Pinto third.

Quaresma and Machado share victories in Juvenil
Qualifying races in the Juvenil category were set alight by André Quaresma (115) - first in qualifying practices - and Mariana Machado (127) who come out victorious.
In Final 1, Quaresma was the first to see the checkered flag after swapping the lead with Machado, who was second while Rodrigo Correia completed the podium. In Final 2, Quaresma started from pole position but technical problems forced him to retire ingloriously. Rúben Silva was the first to cross the line but after a penalty fell to third place. Mariana Machado inherited the win and Frederico Peters was third.

Caixeirinho and Malheiro victorious in Cadet
Tomás Caixeirinho (74) won Final 1 of Trophy António Dinis (cadet category), contested by 24 pilots and integrated into the National Championship, but as in the qualifying races, the uncertainty over the final winner remained until the end. Adrian Malheiro (77) grabbed second place while Duarte Ferreira completed the podium. In Final 2, Adrian Malheiro won and Tomás Caixeirinho crossed the line in second place with a slight difference of 0.058s!. Mário Borges finished third but a penalty relegated him to fourth place allowing Luís Alves to complete the podium.

Cabrelli unbeatable in Initiation category
Mateus Cabrelli (3) dominated the Initiation category of the Tribute to Figueiredo e Silva Trophy, integrated in the National Championship. The pilot from the Algarve region dominated all sessions on Saturday and Sunday winning both Final 1 and 2. Diogo Castro and Manuel Santos completed the podium in Final 1 and 2, while João Maria Gouveia and Bruno Abreu closed the top-5 repeating the same scenario in the Final 2.