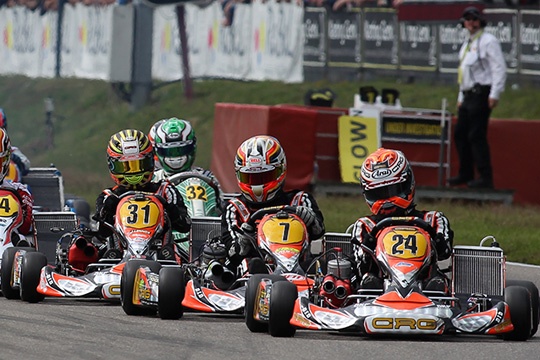 Press Release by: CRG
In the picture: Verstappen in the victorious race of the European KZ Championship in Genk, leading Thonon and Lennox.
CRG and Max Verstappen getting to the fourth and last round of the WSK Master Series of 14 July at Circuit 7 Laghi on top of the KZ2. In KF the works team to line the Japanese Fuma Horio up. In 60 Mini Eliseo Martinez close to the title with team Gamoto on CRG/Hero.

Lonato del Garda (Brescia - Italy). The fourth round of the WSK Master Series – last round of the International Series after the previous rounds held in La Conca, Sarno and Precenicco – will take place this weekend at the Circuit 7 Laghi of Castelletto di Branduzzo.Virtually all titles of the category are still to be decided, but the dicesseem to be drawn in most of them, as in KZ2 where CRG's works driver Max Verstappen is ready to celebrate his third title of season 2013 after already securing the European KZ and the WSK Euro Series KZ1.

VERSTAPPEN HEADING TO THE THIRD TITLE. In KZ2 the advantage accumulated by Max Verstappen is quite consistent and the objective of obtaining the third title of the season seems to be at reach of the young Dutch driver that is coming from the success in the European KZ Championship and from the victory in the WSK Euro Series KZ1.

In the WSK Master Series' standings Verstappen is leading at 171 points, 77 clear of Negro and 78 of Hajek, when 85 points are still to be awarded in Castelletto.

The margin is quite solid and has been built by the CRG driver with a constant pace on top, starting from the double win in theseason opener in La Conca and the two placings in Sarno, followed by the double podium in  Precenicco with another win and a second place.

The magic moment of Max Verstappen in his first year in the category with the shifthelped by quite an unbeatable and performing CRG chassis and a TM engine perfectly prepared by Jos Verstappen, does not allow for much space to the rivals.

In Castelletto, CRG works team will also take on track the Japanese driver Fuma Horio in KF, where the classification is dominated by Dorian Boccolacci, that is in turn very close to the title.

In KF Junior the games have already been closed infavour of Alessio Lorandi, who already secured the title in the latest raceheld in Precenicco.

In the smaller category 60 Mini, another driver on a CRG chassis is on top of the category for  team Gamoto Racing: the young Spaniard Eliseo Martinez gets toCastelletto with very good chances in the title quest. The advantage enjoyed by Martinez amounts to 42 points to Kush Maini, thanks to the double win in Precenicco and the double podium in the opening race of Sarno where he secured a first and second place.

TV COVERAGE. RAI Sport 2 will broadcast a special on this round on Friday 19 July.

All results of the racing weekend will be available at www.wskarting.it