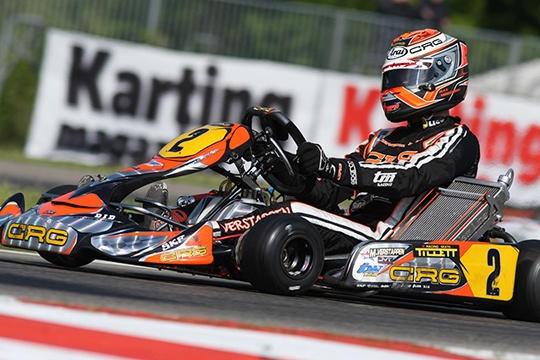 Press Release by: CRG
In the picture: Max Verstappen
MAX VERSTAPPEN GETS TO BELGIUM WITH FULL SCORE AFTER THE WIN IN THE FIRST ROUNDHELD IN WACKERSDORF. HIS HOPES ARE HIGH AFTER THE VICTORY OF THE WSK EURO SERIES KZ1 IN GENK. GOOD CHANCES ALSO FOR THE OTHER  CRG'S DRIVERS IN KZ: JONATHAN THONON, JORDON LENNOX-LAMB, FABIAN FEDERER AND DAVIDE FORE’. FELICE TIENE AND ALEX PALOU TO COMPETE IN KZ2.

Lonato del Garda (Brescia - Italy). This weekend the Circuit of Genk in Belgium will house the second and decisive round of the European KZ&KZ2 Championships. CRG's works team is ready to add more wins to its prestigious International display. It is not going to be easy though, but the whole CRG team and drivers will give it all to show the winning qualities of the Italian outfit. Premises are quite positive and success chances are also high.

CRG LEADING KZ WITH VERSTAPPEN. CRG's objective of this exit will be the title of the highest category – i.e. KZ – with the “enfant prodige” Max Verstappen (CRG-Tm), the 15 years old son of former F1 driver Jos Verstappen, at his fourth year in CRG on top of International standings and with an enviable scoreboard. The most recent success of the young Dutch talent and CRG is the KZ1 title of  WSK Euro Series on this very same track of Genk last 2 June.

CRG works team will also get to Genk with some more champions, ready to step on the podium. First of all, Jonathan Thonon (CRG-Maxter), 4 times world champion, with the most recent title obtained in 2011 in Genk at the end of a memorable duel with De Brabander in the last lap of the race.

The reigning KZ2 world champion Jordon Lennox-Lamb (CRG-Parilla) will compete in Genk  well determined to be on top also in the highest category, as Fabian Federer (CRG-Modena), the 2011 KZ2 European Champion and the very fast CRG-Holland's Jorrit Pex, exiting European KZ1 Champion will do.

Davide Forè proved to have quite good chances and will be at Genk's start on a CRG-Tm belonging to team DTK. He comes from the spectacular win in the last final of WSK Euro Seriesheld last 2nd June on this same track ahead of Thonon and Verstappen that completed a great all-CRG one-two-three.

COUNTERS AWAITED FOR TIENE AND PALOU IN KZ2.  In KZ2 CRG's colors will be defended by the Italian Felice Tiene and by the young Spanish driver Alex Palou. In the first round of the European Championship held in Wackersdorf both drivers – virtually at their debut in the category – did not manage to harvest what they would have deserved. Felice Tiene in particular has to haul on a bump he has been subjected to in the final when he was about to slide in the podium after getting the second place in the Pre-final setting also the fastest lap of the race.

Tiene and Palou will be called to counter charge with a prestigious result even though the “peculiar” regulations of this year awarding points only to the to 15 drivers of the Final without considering the results of Pre-Final or Final-1 as in the past, does not leave very many title chances to the drivers not scoring points in the Final of the first race.

TV COVERAGE.  The races of the European Championship scheduled for Sunday 30 June will be available through LIVE STREAMING on the websites www.cikfia.com and www.cikfiachampionship.com. In Italy, RAI Sport will show them recorded on July the 5th.

All results of the weekend will be available on line at the websites www.cikfia.com and www.cikfiachampionship.com.