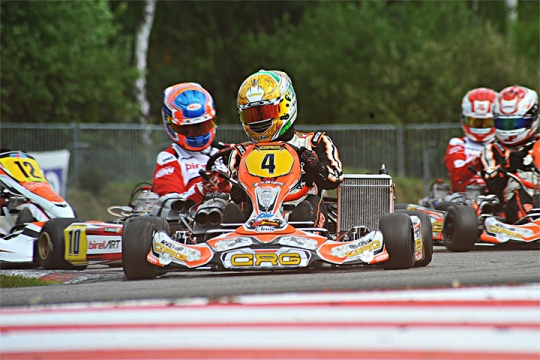 Press Release by: WSK
De Conto (CRG-TM) in KZ and Viganò (Tony Kart-Vortex) in KZ2 grab the leadership of the CIK-FIA European Championship. van Vugt (Exprit-Vortex) leads the Academy Trophy. The overall situation after the 2nd round in Genk (B) from 23rd May in the special TV report on Motorsport TV.

KZ and KZ2 towards the CIK-FIA titles.

The European CIK-FIA Championship moved to Genk (B) last weekend for the second round of the KZ category, the season opener of the KZ2 and of the CIK-FIA Karting Academy Trophy. KZ2 and Academy had their first leaders of the season, while in KZ we now have a clearer picture of the situation. Anyway, the round in Genk said that nothing is certain in none of the three categories. The remaining two rounds closing at Kristianstad (S) on 30th July will be heated and the Championship will be as thrilling as ever. The next appointment is scheduled in Spain, in La Morgal, at the Fernando Alonso Circuit with the categories OK, OK Junior and KZ. The situation of the Championship will be dealt with in the special TV report which will be aired, by Motorsport TV, starting from 23rd May.

De Conto is the undefeated leader in KZ.

Paolo De Conto (CRG-TM-Bridgestone), in the photo above, still on a winning streak in KZ. His leadership at 65 points is now steadier thanks to the second victory scored in Genk. He finished the qualifying stage in both the weekend in the first four positions and then he won in the Final, gaining nearly all the points available. Excellent performance also for Stan Pex (CRG-TM), at his debut in KZ. A flawless race allowed him to step onto the podium in Genk and to gain the 2nd place of the standings with 42 points. On the other hand, the Czech Patrik Hajek (Kosmic-Vortex) dropped to third with 36 points. He managed to recover as far as 6th in the Final after a poor performance in the heats. The French Anthony Abbasse (Sodi-TM), the leader of qualifying in Belgium, placed 4th in the Final and occupies the same position in the overall standings, just ahead of the excellent Dutch driver Marijn Kremers (BirelArt-TM), fifth with 30 points.

Viganò is the first leader in KZ2.

The German Leon Köhler was the leader in qualifying, but the Italian Matteo Viganò (both on Tony Kart-Vortex-Bridgestone) stroke back in the Final, where he won hands down. The leader of the Championship is Viganò (in the photo above) with 32 points, while Köhler is third with 26. Between the two we find Alex Irlando (Sodi-TM), the runner-up in Genk both in qualifying and in the Final: he occupies the second position with 29 points. Good performance for the French Tom Leuillet (Sodi-TM) and the Dutch Martijn van Leeuwen (Energy-TM): they finished in the top five in the Final and are now 4th and 5th in the standings with 19 and 17 points respectively.

Van Vugt’s hat-trick in the Academy.

The CIK-FIA Karting Academy Trophy, the Exprit-Vortex-Bridgestone one-make series, opened with well-defined roles: the Dutch Mike van Vugt (in the photo above) was the leader both in heats and in the Final and now is at the top of the overall standings with 35 points, followed by his fellow countryman Tijmen van der Helm and by the Belgian Xavier Handsaeme, both with 25 points. Good start also for the Englsih Joseph Taylor, 4th with 21 points, and the Belgian Kobe Pauwels, 5th with 17.