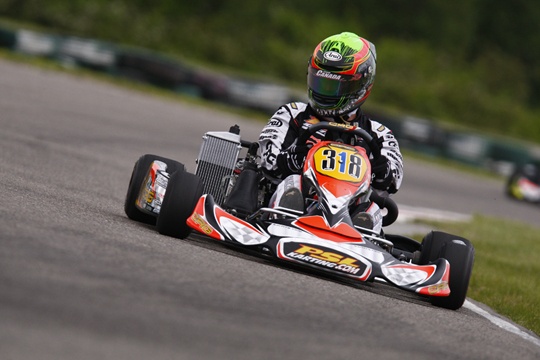 Press Release by: CRG
Pier-Luc Ouellette will make his first start in 2013 ECKC action, pulling double duty in both Rotax Senior and DD2 (Photo by: Cody Schindel/CanadianKartingNews.com)
Trois-Rivières, June 26, 2013 - After a successful start to the 2013 Eastern Canadian Karting Championship (ECKC) series just a few weeks ago, Team PSL Karting is set to make their mark as the series resumes this coming weekend. Taking on the long track configuration at Goodwood Kartways in Stouffville, Ontario, Team PSL Karting will look to continue their storied history at the famed karting circuit.

"Goodwood is the oldest standing track in Canada, perhaps offering one of the most technical circuits for drivers in the ECKC championship," noted Dominic Labrecque, President of PSL Karting. "The DiLeo's, and associated partners, have put a great effort into restoring a track. For PSL, we have always been competitive here and look to maintain those results coming into rounds three and four."

Always able to give Team PSL Karting a competitive edge, the ECKC paddock will be abuzz with the return of two-time Rotax DD2 World Champion Pier-Luc Ouellette. Recently making his first start of 2013 after being out of a kart for seven months, Ouellette managed a sweep of the Rotax Senior category at the second round of the Coupe du Quebec series. Using the regional race for testing of the PSL/CRG Senior package, Ouellette is now poised for his return to ECKC action. Pulling double-duty in both Rotax Senior and DD2, the multi-time Team Canada will no doubt be a contender in each as he looks to continue his legacy with PSL.

"After the Coupe du Quebec race, we were able to test quite a bit of our Senior equipment with PLO, allowing us to be a bit more organized for Goodwood," added PSL Karting Team Manager Andrew Campbell. "I really believe our PSL/JVD engine program is amongst the strongest in North America with consistent development and progress shown in our current results."

The Rotax Senior contingent will see new PSL team recruit Marc-Andre Levesque and Nathan Kelly join Ouellette in the ultra-competitive class. Showing strong pace in the PSL/CRG package at both the ECKC opener and in the Coupe du Quebec series, Levesque posted a strong sixth place result at Goodwood in 2012 and will look to better that effort with his new team. Kelly will make his first start in 2013 ECKC action at Goodwood and is certain to battle at the pointy end of the field.

In Rotax DD2, Ouellette, who scored both final wins at Goodwood in 2012, will be joined by up-and-coming driver Alessandro Bizzotto. Coming off a win and a third place podium finish in the two Coupe du Quebec rounds to date, Bizzotto is poised for a breakout performance in ECKC action. In Rotax DD2 Masters, championship contender Luc Sauriol will vie for race wins after claiming third and second place results in Mosport. Sauriol was the Saturday winner at Goodwood in 2012 ECKC action and will look to repeat in 2013. Francois Bellemare will join Sauriol in the over-32 category as he looks to improve upon two top-tens from rounds one and two.

American Gavin Reichelt will be back with Team PSL Karting north of the border, as the rising talent proved to be fast with his new PSL/CRG Rotax Junior package. Earning fast lap honours and two top-five results in Mosport, Reichelt will continue to give his Canadian counterparts a run for their money in ECKC competition.
Completing the driver line-up for Team PSL Karting is Rotax Mini Max standout Thierry Cote. Already posting multiple podium results in 2013, Cote may just have the breakout weekend to put PSL on top of the podium in the Mini Max category.
Team PSL Karting drivers will take to the Goodwood circuit for the doubleheader race weekend starting Friday, June 28 for event practice, with two full race days to follow on Saturday and Sunday.