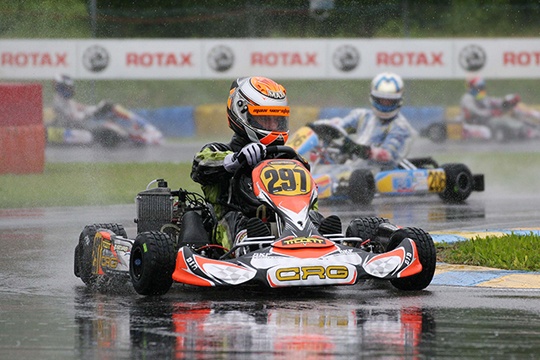 Press Release by: CRG
IN THE SECOND ROUND OF THE ROTAX MAX EURO CHALLENGE IN CASTELLETTO DI BRANDUZZO, MAX VERSTAPPEN CONFIRMS TO BE ONE OF THE TOP DRIVERS AND ACHIEVES THE SECOND PLACE IN THE SENIOR CATEGORY. GOOD PERFORMANCE ALSO FOR JORDON LENNOX LAMB,FOURTH AND VERY CLOSE TO THE PODIUM IN DD2.
Castelletto di Branduzzo (Pavia - Italy). CRG puts in another great performance in one of the top events of the season: the Rotax Max Euro Challenge of Castelletto di Branduzzo (Pavia - Italy). The circuit of Castelletto was the venue of the second round of the International series, with more than 170 entrants taking part in the event. The Italian manufacturer participated in the race with Max Verstappen, Felice Tiene andZachary Claman DeMelo in the Senior category; Jordon Lennox-Lamb raced in the DD2 with gearbox.

VERSTAPPEN IS OUTSTANDING IN THE SENIOR. Max Verstappen put in a great performance on a CRG kart in the Rotax Seniorcategory. He was always with the top drivers on the 7 Laghi Circuit, both under the rain in the qualifying heats and on the dry track of the final phase. For the Dutch driver it was like going back to the beginning of his career, when he was very young and started racing in the Mini-Max Rotax championships: he won the Benelux championship twice and the Dutch championship once.

Despite the troubles he met in trying to adjust to the Mojo tyres – which he had never used before - Verstappen managed to be immediately among the fastest in qualifying, setting the fourth fastest time in his group and then achieving two first and two second places in the rainy heats on Saturday. In the Pre-final, Verstappen placed second, behind the English Harry Webb, and set the fastest time. The Dutch driver achieved the same result in the Final, always behind Webb and after losing ground in the first part of the race. The result, however, was satisfactory for the whole team confirming,once again, the great quality of the CRG chassis, performing with all trackconditions.

Felice Tiene and the Canadian Zachary Claman DeMelo were not as lucky, despite a good performance in qualifying where Tiene set the 9th time and Claman DeMelo the 15th. In the heats Felice Tiene was dogged by bad luck in several circumstances and in one of them he was obliged to retire. A retirement which did not allow Tiene to enter the Final, while Claman DeMelo had to surrender in the second-chance race, where he placed 22nd.

LENNOX’S PERFORMANCE IN DD2 IS AWESOME. Great performance also for Jordon Lennox-Lamb in DD2, at his debut in this category. He started well and set the overall 4th time in qualifying. Then, in the heats, the English driver placed second and seventh, but he paid dear his retirement in the third heat.

In the final phase he was obliged to close the gap: his great skills helped him to recover from 19th to 9th in the Pre-final – he even set the fastest time! -. Then, in the Final, he finished fourth, just two tenths of a second away from the podium.

Lennox’s result is good, but he deserved more than this, especially after the great recovery which brought him to the fourth position: a result made possible by the great quality of the CRG chassis in this DD2 category, where CRG is going to be the partner of Rotax in the 2013 Grand Finals, on schedule in the USA, in New Orleans.

All the results on  www.rotaxmaxeurochallenge.com/index.php