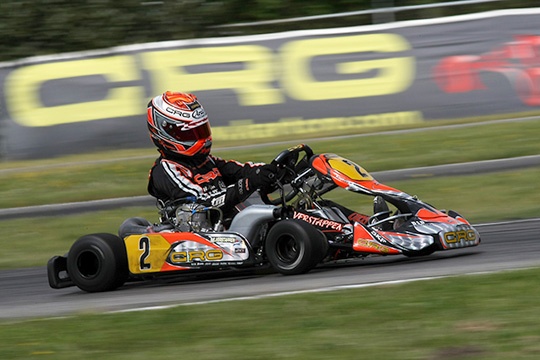 Press Release by: CRG
MAX VERSTAPPEN ARRIVES IN BELGIUM WITH A 60 POINT LEAD. IN KZ1, BESIDES VERSTAPPEN, ALL THE OFFICIAL TEAM IN VIEW OF THE EUROPEAN CHAMPIONSHIP OF END JUNE. IN KF JUNIOR, MARCU DIONISIOS AT HIS FIRST TIME ON A CRG.
Lonato del Garda (Brescia - Italy). This week, the appointment with international karting is in Belgium, on the circuit of Genk, for the fourth and last event of the WSK Euro Series. CRG is battling for the KZ1 titlewith Max Verstappen, who actually has already laid his hands on the 2013 trophy given his 60 point lead.

CRG WITH ALL ITS TOP DRIVERS IN KZ1. With 85 points at stake in the double final in Belgium, Max Verstappen stands a great chance to grab the title, even though in motor racing you can never say die. In the WSK Euro Series, after achieving an impressive winning streak in the first two races of La Conca and Zuera – 4 victories out of four finals – Verstappen, on his CRG powered by TM, lost momentum in the round of Sarno. There he placedthird in race 1 and then, unfortunately, retired for a technical issue in race 2.

Great expectations, always in KZ1, also from the performances of Jonathan Thonon (CRG-Maxter), who won his fourth world title right in Genk in 2011, and of Jordon Lennox-Lamb (CRG-Parilla). The two drivers are seventh and eighth respectively in the championship standings. Also Jorrit Pex (CRG-Tm), of the CRG Holland team, is very motivated and he can definitely aim high. Also Fabian Federer - on CRG-Modena – is taking part in the Belgian race, while Davide Forè is racing on a CRG chassis but for the Polish team. DTK. He, too, can aim atclosing the gap in the championship and, at the same time, the Belgian race is excellent training in view of the second and last round of the European championship, on schedule for the end of June right here in Genk.

GOOD EXPECATIONS IN KF TOO. In KF, CRG standard-bearers are Felice Tiene, currently fifth in the championship after his rather unlucky performance in the last part of the race in Sarno. Besides Tiene, the Spanish Alex Palou, who is improving fast in this category after winning the KF3 in last year’s edition of the WSK Euro Series. Good performances are expected also from the Japanese Fuma Horio and the Spanish Pedro Hiltbrand Aguilar, the latter racing for the LH Racing team.

DIONISIOS WITH CRG IN KFJ. On this occasion, in KF Junior, CRG presents a rather competitive driver: the Rumanian Marcu Dionisios, winner of the 2010 WSK Nations Cup in the 60 Mini and of the WSK Master Series in 2011. He is at the debut with the Italian manufacturer and can already aim at victory.

ON TV. On Sunday 2nd June the WSK Euro Series races of Genk live in streaming on www.wskarting.it. On Friday 7th June the WSK TV Magazine on Rai Sport.