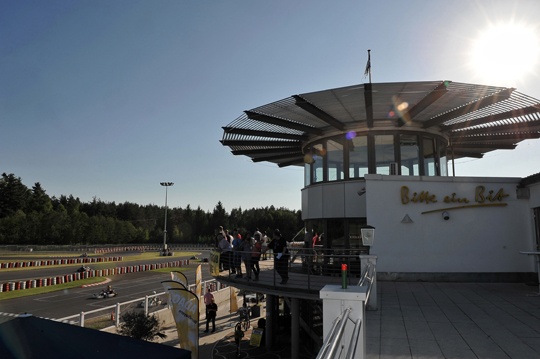 Press Release by: DKM
The Premier League of German kart racing will be travelling to the second ranked race of the German Kart Championship in Wackersdorf on the upcoming weekend
40 kilometers north of Regensburg, 155 participants from more than 18 nations will be starting. Among the favorites are kickoff-winner Dorian Boccolacci (DKM), Jorrit Pex (DSKM) as well as David Beckmann and Parker Thompson (both DJKM).
The three grade series of the German Motor Sport Foundation (DMSB) started successfully into the 2013 season in Bavarian Ampfing. 136 drivers started at the first of five racing weekends and showed great kart racing under bright sunshine. In addition to numerous spectators around the 1.063m long Schweppermannring, more than 5000 fans around the world were able to experience the racing events via DKM Video-Live-Stream on the World Wide Web as well. Up to 13 hours of live images will be broadcast into the living rooms from Wackersdorf as well – these can be awaited excitedly.

The Prokart Raceland belongs to the most modern race tracks of Germany and is very popular among the drivers. The reigning junior champion Hannes Janker is looking forward to the challenge: “Wackersdorf is one of the most challenging tracks I know. Due to the many switchbacks, it’s always difficult to find the right break and turning points. Additionally, there are a lot of possibilities for overtaking, which will provide special excitement during the races.”
Two weeks before the CIK-FIA KZ1 and KZ2 Kart European Championship, which will be taking place in Wackersdorf as well, DKM-series coordinator Stefan Wagner experienced a great interest regarding the last free starting positions. “The DSKM is completely filled up counting 68 drivers and will start in Wackersdorf with a top-class field.”

In the DKM, the ranked races number 3 and 4 can be excitedly anticipated as well. French Dorian Boccolacci (Energy Corse s.r.l.) dominated the events at the kickoff and achieved two clear victories. He won’t be starting in Wackersdorf though, giving his competition a chance to catch up. Most of all Hannes Janker (TB Motorsport Racing Team), who provided the biggest surprise – the reigning German Junior Kart Champion fought his way up to 2nd place during the final and will now be travelling to the race on his favorite track as third driver on the overall list of rankings: “We had slight initial difficulties in Ampfing, but were able to deal with them during the finals and could therefore fully attack. I’m now hoping for a repetition in Wackersdorf.” Currently on second place is John Norris (Mach1 Motorsport); the Irish driver is reigning vice champion and will try jumping to the front in Wackersdorf. Dutch Kim Oomen could become a danger to his plan. After a yearlong racing break she celebrated a great comeback and was immediately on eyelevel with her competition. On the overall list of rankings, the Dutch girl is currently on 4th place in front of French Viktor Compere (VDK Racing Team).

There was a high power density in the German Junior Kart Championship. German David Beckmann (Zanardi) and Parker Thompson (Energy Corse s.r.l.) from Canada divided the victories in Upper Bavaria between them. While Thompson will not be starting in Wackersdorf, Beckmann belongs to the great favorites. Their pursuers will not be shaken off so easily though. Dutch Martijn van Leeuwen (Keijzer Racing) was considered a strong title contender at the beginning of the year and crossed the finish line in Ampfing on second places respectively. German Maurice Geschwind (TB Motorsport Racing Team) and Cedric Piro (PM-Racing) provided another surprise: the duo got in on the top five and will now try to tie in with these successes in Wackersdorf. Maybe Gino Wetzels (Daems Racing Team) will manage a turnaround too. After a lousy kickoff, he now wants to fight for places on the podium again, driving for a new team: “The first few tests with my new racing material went very well. I’m now looking forward to Wackersdorf – last year I came in on 3rd place there,” he said, excited about his start.

Counting 68 drivers, the German Shifterkart Championship will be the highlight of the weekend. Regarding the awarding of the Championship title, double champion Jorrit Pex (CRG Holland) backed up his ambitions concerning title number three and during the past, has shown numerous times that he’s able to win in Wackersdorf as well. Here, Pex achieved two DSKM-victories in 2012 and also won the European Kart Championship. His competition will give it their all to stop him though. Especially Kart World- and European Champion Davide Foré (DTK Racing Team Poland), who already made life harder for Pex in Ampfing by coming in on second places respectively and who was very impressed with his strong competition in the German Championship: “After having followed the races via Live-Stream last year, we have now decided to compete this year as well. The Championship is very professional and I’m excited for the racing events in Wackersdorf.” As well he should be: numerous international top drivers will use the weekend as preparation for the Shifterkart European Championship, which will be taking place two weeks later in Wackersdorf as well. From Germany, contenders for a front position are surely Stefan Ott (CRG Holland), Marcel Jeleniowski (CRG Holland) and Kevin Illgen (ADAC Sachsen e.V.).

While the drivers will be able to get used to the conditions of the track during free trainings on Friday (May 3rd 2013), they will have to be fully concentrated during qualifying on Saturday (May 4th 2013). By achieving fast lap times, the drivers will be able to gain good starting positions for the following Heats. On Sunday (May 5th 2013), only the best 34 participants will achieve entering the finals. All those who stayed at home will be able to follow the racing events via DKM Video-Live-Stream and the official DKM Facebook-Fanpage.