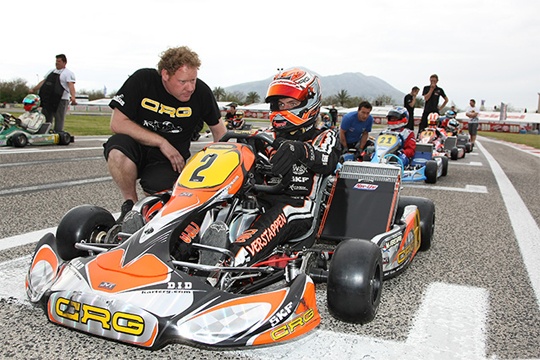 Press Release by: CRG
Max Verstappen arrives in Precenicco as the leader of the KZ2 category before the third round of the WSK Master Series. The series is hosted by the International Friuli Venezia Giulia circuit for the first time. Also Fuma Horio in KF races for Crg. In the 60 Mini, Martinez tries to win his second championship.
WSK MASTER SERIES – PRECENICCO, 3rd-5th MAY 2013

Lonato del Garda (Brescia - italy). After the third round of the WSK Euro Series on last 21st April inSarno, the WSK is once again in Italy for the third round of the Master Series, at its first time on the International Circuit Friuli Venezia Giulia, in Precenicco (Udine). The main target for the CRG Official team is confirming the leadership in KZ2 with its young talent, the Dutch Max Verstappen, the leader of the championship with a 31-point lead.

IN KZ2 VERSTAPPEN IS THE LEADER. In KZ2 Max Verstappen, on CRG-Tm, had a terrific beginning of season, with an impressive winning streak which started right with the WSK Master Series and his double win in Muro Leccese which made him gather 85 points. In the following round in Sarno, Verstappen was dogged by bad luck, but despite all he managed to gain 16 points and to keep the leadership of the championship with a remarkable lead of 31 points over De Conto and of 36 over Negro.

This round in Friuli is absolutely crucial and precedes the last round of Castelletto di Branduzzo on 14th July. The other CRG Dutch driver, Jorrit Pex, sixth in the championship, will not participate in the event, given that he is taking part in the concurrent second round of the German Championship in Wackersdorf. He is the current leader of the German Championship after the first round of  Ampfing. Davide Forè, on CRG-Tm, is racing in Germany too. He drives for the Polish team DTK and he is second in the Championship.

FUMA HORIO IN KF. In KF, CRG is represented by the Japanese Fuma Horio, a driver who is improving fast thanks to his participation, this year, in the International Championships. Last year he took part in just few races outside Asia. In this race, Fuma Horio will drive on a performing  CRG chassis powered - this time - by Parilla.

MARTINEZ BACK IN THE 60 MINI. The 60 Mini is back on track after the conclusion of the WSK Euro Series in Sarno. Once again, the centre of attention will be the Gamoto Racing teamwith the  CRG/Hero chassis of the Italian factory and the new European Champion of the Series, the young Spanish Eliseo Martinez. Gamoto arrives at this appointment at its best: besides Martinez there is also the Greek Kostantinos, the Malaysian Muizzuddin Musyaffa Abdul Gafar and his fellow countrymanNazim Azman.

In the Championship, Martinez, after leading the standings at the beginning of the championship, is second on the eve of this third round of the WSK Master Series. Between him and the leader, Kush Maini, a 27 point gap, but the Spaniard is ready and motivated to take over the leadership and try to put his hands on the second title of the Euro Series.