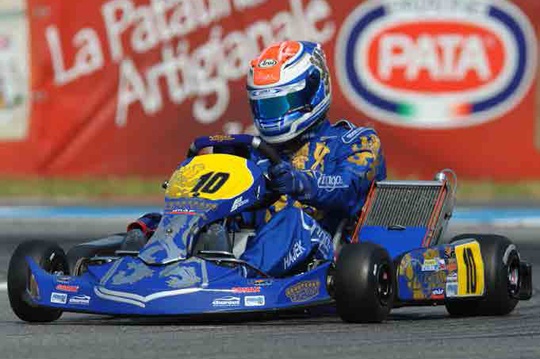 Press Release by: Praga Kart
THE 2013 WSK EURO SERIES REACHED ITS 3RD AND PENULTIMATE ROUND ON THE NAPOLI INTERNATIONAL CIRCUIT IN SARNO (SALERNO), ITALY. PRAGA KART RACING IS A PROTAGONIST IN THE SHIFTER CATEGORIES
The penultimate round of the 2013 WSK Euro Series ran in Sarno (Salerno, Italy) at the Circuito Internazionale Napoli. Praga Kart Racing was on track in the KZ1, KZ2, KF and KF Junior categories. In KZ1 Patrik Hajek is, as always, a front runner. In the qualifying he is overall 2nd best, then on Saturday he is 7th overall after the heats (5th and 8th) and 11th in Final 1, despite a contact. On Sunday he is 8th in the heats, 7th in Final 2 with second best lap and 8th in the championship standings. Praga Kart was also on track in KZ2 with multiple world title holder Alessandro Manetti, Technical Manager for the team, who is on top in the first phases, then unlucky: 3rd in the qualifying, 3rd after Saturday’s heats (6th and 3rd), he is then victim of a contact in Final 1 (23rd). On Sunday luck was not on his side, as he took ill early in the morning. Still, he pushed through with the heats, fighting his way back up to 11th in the first heat, but in the second heat he is forced to retire during the formation lap due to technical issues. Unfortunately, his illness worsened throughout the day, and kept him from running in Final 2.
Praga is also strong in KF with Karol Dabski. He does well in the heats (4th and 7th in two races), but “pays” for a contact and a KO, qualifying 27th. In the decisive phase the Pole is forced to run on the rebound and manages to do so big time: 18th in the pre-final and, with great speed, 12th in the Final.