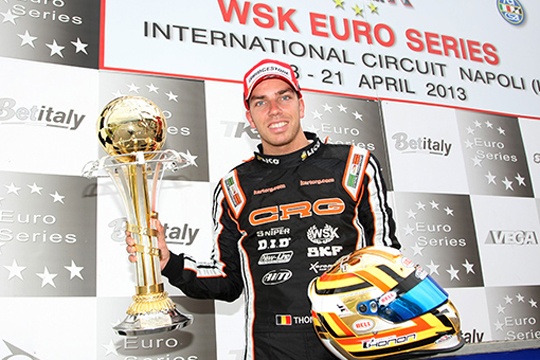 Sarno (Italy). The weekend in Sarno for the third and last but one round of the WSK Euro Series closed with another remarkable performance of CRG. In KZ1 Jonathan Thonon, on his CRG Maxter, is the runner-up of Sunday Final 2; in the 60 Mini the Spanish Eliseo Martinez (Gamoto) is the WSK European Champion, but the final was won by the Greek Kostantinos.


VERSTAPPEN STILL AT + 60. In KZ1, the championship leader, Max Verstappen, was dogged by bad luck and, after the third place conquered in Saturday first final, obliged to retire from Sunday Final at the second lap for technical troubles. The Dutch driver, on a CRG-Tm, is still the leader of the championship with a remarkable lead over his rivals: 60 points over Hanley. On 2nd June, the last round in Genk (Belgium) where Verstappen will just need to control the race to win the championship.

Jonathan Thonon's second place, even though achieved in a Final won by Lammers and finished with karts obliged to slow down and keep their positions until the finishing line for the accident occurred to Kozlinski and Iglesias, confirms the competitiveness of the Belgian driver in this period of the season. Thonon and CRG can aim at great results in the forthcoming international events.

Jorrit Pex, too, confirmed his skills on his CRG-Tm finishing in fifth position. Also Jordon Lennox-Lamb, on CRG-Parilla, could have put in a good performance if he hadn't  been pushed off track by Iglesias during the second lap. However, Lennox, this year too, is among the top drivers. Both Davide Forè (CRG-Maxter), 17th, and Fabian Federer (CRG-Modena), 19th, had several technical troubles and finished a bit behind.

In KZ2, where Zanchetta achieved a thrilling win on Maranello-Tm,CRG got a good result thanks to the young Polish driver Bartosz Idzkowski on CRG-Maxter of the DTK team: he placed 5th in Final 1 and 8th in Final 2. Giovanni Martinez (CRG-Maxter) was obliged to retire in Final-2 for a puncture during the formation lap.

IN KF BITTER FINAL FOR TIENE. In KF Felice Tiene on CRG-Parilla would have deserved better luck after the good performance put in throughout the whole weekend, beginning with his third time in qualifying, then the good results in the heats and, finally, the promising fifth place in the pre-final, where he battled for the first positions until the end.
Unfortunately in the final Felice Tienehad a contact with another driver and was obliged to pull over at about half race.

Alex Palou (CRG-Parilla) was not luckier than his teammate: he got involved in an accident in the Prefinal which obliged him to a recovery race in the final. Despite that he managed to close with a good 19th place achieved starting from the last rows of the starting grid.

Good performance for the Spanish Pedro Hiltbrand Aguilar, on LH-Tm of the LH Racing team, who missed the podium right at the last lap after reaching second place. Hiltbrand finished fourth, but he is definitely ready to be a top driver.

Zachary Claman DeMelo (CRG-Bmb) did not manage to enter the final because hit by a 10" penalty in one of the heats.

In KF Junior, Devlin De Francesco (CRG-Bmb) failed to enter the final for just one position - he finished 18th in the Pre-final - as well as  Stan Pex of CRG Holland, obliged to retire in the Pre-final.

IN THE 60 MINI MARTINEZ IS THE CHAMPION. The 60 Mini, at its second and decisive round, saw the victory of the CRG Spanish driver Eliseo Martinez (Gamoto) - who was then mathematically sure of the title - and the double win of the Greek Kostantinos in the Final after a sprint with Martinez himself. A good success and a well deserved reward for the excellent work done by the Gamoto team with the  CRG/Hero chassis, besides the indisputable skills of these two young and promising drivers.

NEXT APPOINTMENTS. The fourth and last appointment of the WSK Euro Series is on 2nd June in Genk (Belgium). The third round of the WSK Master Series is on 5th May on the International Circuit Friuli in Precenicco (Italy).

THE INTERVIEWS. Euan Jeffery, CRG team manager: “In KZ1 the weekend was rather tough, with many drivers close to each other. Anyway, all our drivers put in good performances. In Final 1 Verstappen managed to achieve a good third place, while in Final 2 it was Thonon who showed his great competitiveness and placed second. Very likely,without the accident between  Kozlinski and Iglesias which "freezed" the positions, he could have battled for victory. In Final 2, unfortunately,  Verstappen and Lennox had to stop during the first laps, otherwise we would have recorded good results. In KF Tiene did well throughout the whole weekend, but in the Final he had a contact with Lavelli and had to pull over. Palou went really fast in the Final, but he started from the back rows and didn't manage to achieve a good result. Anyway, he is improving fast at his first year inKF."

Jonathan Thonon (KZ1): “It was a good second place but I'm disappointed by the fact that the race finished with a yellow flag situation, otherwise I could havebattled for victory. I'm happy anyway because I was always very fast, just like in the race of Zuera. I'm glad because I'm keeping a steady pace both in qualifying and during the race.  I want to say thank you to all the team, my mechanic and all those who assisted me, like the TecSav preparer who has been working a lot during this month to grant me the highest level of performance of my engine. I'm confident about next appointments and, above all, I'm ready for the European championship."

Max Verstappen (KZ1): “The weekend started well. I had some troubles with the chassis setup which we managed to fix before Final 1. In fact, with twomore laps I could have won the race. Today, in the first heat, I had some sliding and then some engine issues. In the second heat I burnt the clutch at the start and I had to retire. In Final 2 I just drove two laps and then I had a problem with the spark plug. A weekend to forget, but I still have a 60 point lead in the championship."