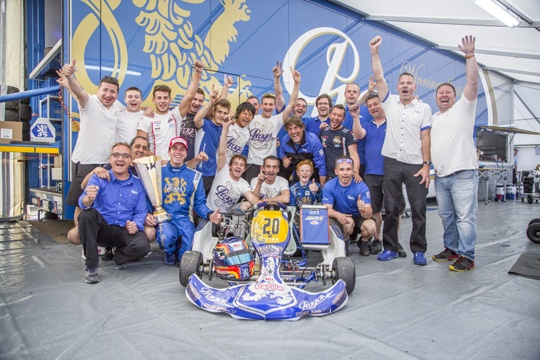 Press Release by: Praga Kart
The Praga Kart Racing Team entered the final round of WSK Super Master Series in Italian La Conca. The blue team had a record of number of drivers.

In the strongest class there were traditionally drivers- Thonon, Hájek and Pescador with a new comer Kirill Karpov. In class KF there were also 4 drivers- Dabski, Bertonello, Sato and a Czech driver Václav Šafář. The KFJ class was represented by only Rasmus Lindh. The Saturday’s heats were under changing weather conditions, where wet and dry conditions were swapping. Sunday was a total opposite with a sunny weather trough out the day.

Starting with Thursdays free rides, Rasmus Lindh showed great improvements. This young driver entered into KFJ class just this year and he is gaining valuable experiences, and for this reason the team values his performance during the whole weekend. Noticeable improvements didn’t come only in terms of better lap times but also in his driving appearance and strategic thinking. This resulted in starting the finals from front rows and taking many times 6th position in the final rounds. The finals however didn’t went so well do to lack of experiences, yet he finished in the top 10 at 9th position.

The IPK factory prepared for KF category several modifications to the chassis. With regards to the upcoming CIK FIA races the main goal of all the drivers was to gain more developing knowledge for the next part of the season. Dabski and Bertonelli didn’t have good starting positions and therefore they finished at 19th and 23rd positions.

Already in Friday’s free rounds Jonathan Thonon was one of the fastest drivers of the KZ class. He scored 2nd place for 3 times losing only minimum behind the winner (0,004, 0,007 and 0,004). He won the Friday’s qualifications and in Saturdays heats he got 2 times 1st place and one 3rd and he also won the prefinals on Sunday and he started the finals from the pole position. He however didn’t maintain the 1st position but he was on a second place in the whole finals as well as in the finish. The distance between the winner and Thonon was minimal the whole time and both of the drivers were ahead of all the others from the starting pole.

Jonathan Thonon comments the successful race: “I am very happy that I managed to get a podium with Praga chassis and IAME engine once again. The Praga Kart Racing Team did a great job and for my work it is crucial that the atmosphere in the team is friendly yet professional, and the team is assembled with specialists who know their tasks. I had the fastest lap time of the weekend in La Conca and I would especially like to dedicate this success to the IPK factory and to all the members of the Praga Kart Racing Team. ”

The next race will take place in La Conca at the beginning of the CIK FIA European Championship in less than two weeks.