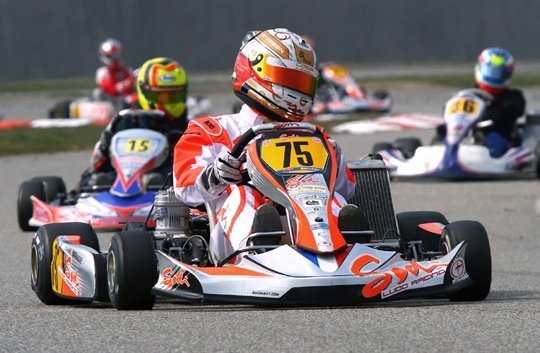 2012 was a season full of positive results for Sodi drivers: a U18 World Champion title for Henry Easthope, a 2nd place for Anthony Abbasse in KZ at Las Vegas, a world title for Jules Gounon in X30 Senior and a world title for Thierry Delré in X30 Shifter. The new karting season is still in its early stages but Sodi has already conquered an international title on the circuit of Mariembourg, in Belgium, at the X30 Challenge Europa, in the top category of X30 Senior, which is called Premium in France. Behind the wheel of his Sodi Celesta, Vincent Fraïsse, a driver from Ludo Racing, showed no not hesitations and hit the great slam: pole position in timed qualifying, two victories in his two pre-finals and 4 victories in a row in the four races!
Beyond numbers, what is evident is the high level of entrants, with drivers who regularly compete in international meeting in KF2, KF3 or Rotax Max. There was a majority of French, Belgian and German drivers, but also Swiss, Danish, Portuguese, Swedish and Japanese participants. With nearly 70 drivers, X30 Senior represents the top class of this competition. A single-meeting event, the X30 Challenge Europa includes four races in two days, like in a World  Championship. Therefore the final result was by no means a matter of chance.

Fraïsse started the weekend by setting the fastest time in timed qualifying and then stretched his lead during the heats. Both on Saturday and Sunday, he kept the momentum going by winning the qualifying pre-final and then the two races. His supremacy became more and more evident: with a growing lead over his pursuers, he was able to smartly control the race and then he brilliantly claimed victory. It was a masterstroke, which revealed the perfect symbiosis between the kart, the driver and his team Ludo Racing.
For a constructor such as Sodi, these one-design competitions are the ideal opportunity to show chassis qualities since engines are identical for all the participants. Vincent Fraïsse had nothing but praise for Celesta, which he drove at Mariembourg: «It is a real pleasure to drive this chassis! Sodi is stable, reliable, and precise on turns, I have really enjoyed it. I could easily spare my tyres, which is fundamental in this competition, while aligning my performances without forcing too much. With Ludo Racing, we had no problem finding the right set-up, though it is a demanding circuit from this viewpoint».