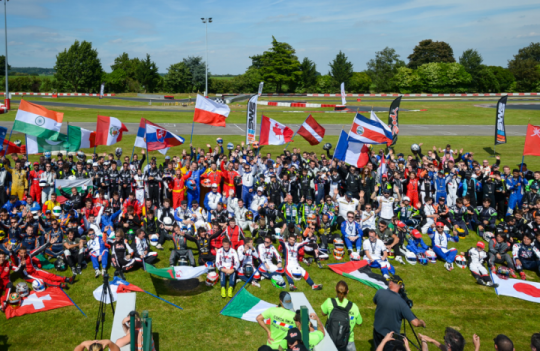 Press Release by: Sodi Kart
On the 26th and 27th of May, the 280 best drivers in the world will compete at the RKC circuit near Paris, in the 2017 SWS World Final, the benchmark world event for leisure karting.
These drivers, representing 35 different nationalities, have brilliantly qualified at the end of the 2016 SWS season by finishing in the 1st positions of their respective countries. They will have two days of intense racing to represent their country and their SWS affiliated track in the best possible way in a competition marked by fast driving and fair play.

The top 40 young people (11-15 years old) in the SWS international ranking will be divided into two weight sub-categories this year, which will ensure total fairness throughout the event. The JUNIOR CUP category will participate LR5 model karts in a deregulated 200cc version just out of the SODIKART factory, near Nantes (France). This configuration will ensure a captivating and fair show on the track and a great memory for these talented drivers.

The SPRINT CUP category will bring together the world's best drivers over 15 years of age for the individual race. Four heats will qualify the drivers for the Final during which the 2017 winner of the Sodi World Finals will be crowned. At the wheel of the powerful SODI RX250 karts, all these drivers will give their all to finish on the top step of the podium and try to dethrone the Belgian Kévin Caprasse, the record winner who is again defending his title this year.

ENDURANCE CUP: The 40 top teams in the world on track for 12 hours (semi-night)

The ENDURANCE category will be exciting this year as the title will be coveted by 40 renowned teams, including the top three from the 2016 podium. Many outsiders, familiar with long SWS races on circuits across the world, will give everything to upset this hierarchy at the end of the 12 hours of racing. The category will run for the first time on the new model 390cc SODI SR4 and on the 1200m track in an anti-clockwise direction.

The Sodi Racing Team will put on the show!

This year, the SODIKART factory will bring its Official Team and its two drivers Anthony ABBASSE and Bas LAMMERS. The two drivers, who have accumulated world class performances this season (Winner and 3rd in the 2017 WSK in the KZ category) will be available throughout the event to talk to all the participants. They may even be tempted to drive a kart during the weekend!

Awards and a prestigious ceremony

Over the course of the event, many podiums will reward the performances of the drivers. In total, an equivalent of €50,000 in prizes will be distributed to the winners of the different categories. Finally, after the races, the drivers will end the weekend in a historic castle for a gala dinner.

Access to the RKC circuit is free and open for the duration of the event.