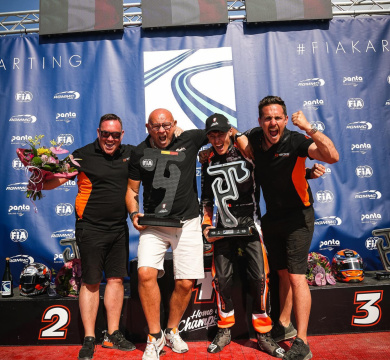 Press Release by: Sodi Kart
With this victory, achieved thanks to great technical and sporting skill, Émilien Denner and the Sodi Racing Team could not have started their FIA Karting European campaign in the KZ category any better. The French driver, who took pole position in Timed Practice, scored significant points by leading the standings after the heats and the Super Heat, and then by winning the Final with a lead of more than three seconds. His fastest lap in the race demonstrates the competitiveness of the French brand's equipment.
Already leader of the FIA European Karting Championship in OK-Junior, the Sodikart brand is also leader in the premier gearbox category. In Belgium, it all started with pole position for Émilien Denner after a remarkable time of 50"511, which was never beaten for three days and which remains a benchmark in Genk. Denner followed this up with three wins out of three in the Qualifying Heats. "My Sodi-TM Racing kart was simply incredible! I was really performing well, whatever the conditions, whether it was cool in the morning or in the afternoon when the heat and grip arrived," commented Emilien. "From the first to the last lap I was able to keep my rivals under control. The Final was like a dream, I was able to keep a very strong pace until the end in order to increase the gap. Now, the objective is clearly to go for the title in June in Cremona, Italy."

A perfect control of the conditions
Senna Van Walstijn was also very fast, as shown by his 5th place in the Super Heat on Sunday morning, and would have liked to fight for the podium, but a missed heat on Saturday morning forced him to make constant recoveries that ended with a 7th place in the Final.

In KZ2, Sodikart was the second best-represented brand and did not fail to perform at a high level, in collaboration with the CPB Sport team. Thomas Imbourg, winner of a heat, was aiming for an excellent result, before dropping down in the hierarchy during the Super Heat and having to be satisfied with a recovery to 11th position in the Final. Arthur Carbonnel, Jean Nomblot, David Liwinski, Matteo Spirgel and Arthur Lehouck also had the opportunity to demonstrate their speed in Genk.

Mansel Smith, Team Manager of the Sodi Racing Team, gives his analysis. "Apart from his 2nd place in the Super Heat, in which Emilien did not take any risks to secure pole position for the Final, he won everything during this meeting, with an outstanding attitude! Such a victory requires a lot of work, and also perfect equipment and this was the case in Genk. We must obviously give credit to our engine manufacturer TM Racing for this success."

Bertrand Pignolet, President of Sodikart: "Winning this first KZ round of the FIA Karting European Championship, a few days after our first victory in OKJ, rewards the work of the whole team. Émilien dominated the whole weekend, constantly putting in great performances. We can be proud of this new victory and of the work done by the Sodi Racing Team, the factory and our various partners. These results do not happen by chance, especially at this level of competition where every detail counts. Now we have to build on this momentum in the next races."