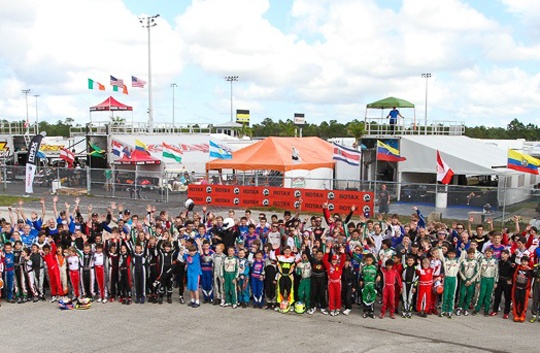 After four event weekends of intense competition through the first two months of the racing year, Formula Kart Productions’ Florida Winter Tour gets set to host back-to-back championship weekends at the Ocala Gran Prix karting facility in Ocala, Florida.
At stake are multiple class crowns in the FWT Formula Kart Racing and FWT Rotax MAX Challenge programs, and the prestigious FWT Nations Cup and Manufacturer’s Cup championships. Also on the line is over $22,000 in Skip Barber car racing awards, a seat at the Granja 500 Endurance event, eight seats at the Rotax Grand Finals and the presentation of the annual Dan Wheldon Memorial / FWT Karting Ambassador Award.
THE NUMBERS
It’s been a banner year for one of the world’s oldest and largest karting programs. The FWT features two separate series run on back-to-back event weekends each January, February and March. Entries in the Formula Kart Racing portion of the 15th annual FWT are up 14% this year, thanks in large part to the popularity of the new format that added an extra heat race with an inverted starting order. So far the 2013 FWT Formula Kart Racing program has seen participation from 136 unique drivers representing an average of 179 entries per event weekend. The Rotax Max Challenge program at FWT continues its run as the world’s largest official RMC series. So far the 2013 FWT RMC has seen participation from 296 unique drivers representing an average of 451 entries per event weekend.

THE COMPETITION
The Florida Winter Tour is known worldwide as “THE Winter Place To Be”. It’s also known as THE place for champions to be. This year we’ve witnesses the best from a multitude of world karting championships. The DD2 Masters class alone represents seven world karting championships between Cristiano Morgado (South Africa), Alessandro Manetti (Italy), Scott Campbell (Canada) and Christophe Adams (Belgium). With the return of defending FWT DD2 Masters Champion Alan Rudolph (USA) to the grid in Ocala, one would be hard pressed to find a more accomplished group of racers dueling for the FWT Palm trophies.

THE ATTRACTIONS
When asked why they come to the Florida Winter Tour, the racers most often cite the incredible level of competition. However, The Tour offers more than just competition. Everyone, competitors, family and friends alike, enjoy all that Florida has to offer. Many of the participants coming to Ocala from around the globe list Orlando, Disney World and the Magic Kingdom at the top of their “must see” list. With Daytona International Speedway, the World Golf Hall of Fame, Kennedy Space Center and many beautiful beaches all within a two hour’s drive of Ocala, it’s no wonder this FWT stop is so popular.
Attractions within minutes of Ocala are many and varied. The Don Garlits Museum of Drag Racing is just a few exits down the highway from Ocala Gran Prix and features some of the most historic and unique machinery ever to go down the quarter mile. For those that enjoy nature, Silver Springs, Paradise Springs, the Juniper Prairie Wilderness, Alexander Springs and Cactus jack’s Trail Rides are all worth considering.

THE AWARDS - THE PALM
This year Formula Kart Productions introduced their signature FWT award, The Palm. FKP’s Bill Wright has always appreciated that certain trophies in motorsport hold a special significance, and he hopes The Palm will reach that special “icon” status with kart racers from around the world. With the level of FWT competition at an all-time-high the inaugural group of Palm recipients will be well deserved.

DAN WHELDON / FWT KARTING AMBASSADOR
On Sunday, during the Rotax MAX Challenge weekend, Formula Kart Productions owner Bill Wright will have the honor of presenting the Dan Wheldon Memorial / FWT Karting Ambassador Award. This award is presented annually to the FWT participant who best represents karting with a fiercely competitive spirit, a helpful and positive attitude and a professional image. It’s important to note that eligibility for this award is not limited to FWT drivers, but any FWT participant; tuner, team manager, business owner, etc. Last year the award went to James Russell Jr., who is all those things, and by a unanimous vote amongst the FKP panel of judges.
Dan was a beloved competitor in the FWT who was more than just a race winning driver. Dan was involved in many aspects of the sport and was always willing to lend a hand to help others. Although his memorable smile was sadly taken away from us, his spirit remains. There’s still time to nominate who you feel deserves this award. If you would like to do so, please send their name, and a brief description of why you feel they deserve this honor, to live@FloridaWinterTour.com.

SKIP BARBER RACING
Another award that has generated a lot of attention is the Skip Barber Racing / FWT Award. This competition based program awards $22,000 worth of racing in Skip Barber formula cars to the top three registered points scorers. Drivers score point in both the FWT Formula Kart Racing program and FWT Rotax MAX Challenge. Full details can be found on the Florida Winter Tour website at http://www.floridawintertour.com/news/61-2013/366-skip-barber-fwt-22000-scholarship-awards.html.
In 2012, Kyle Kirkwood used a perfect season in the Formula Kart Racing program to vault himself into an unassailable lead in the Skip Barber Racing / FWT Award. This year, Daniel Formal has had his mind firmly set on winning this award and is so far unbeaten in Formula Kart TaG Senior competition. Could we see a repeat of history and another champion with a perfect season kicking off their car racing career with the Skip Barber Racing / FWT Award? Come to Ocala Gran Prix or tune into FWT LIVE! to see it as it happens.

NATIONS CUP
After the Palm Beach and Homestead rounds The United States looks like it’s in the driver’s seat to repeat as the FWT Nations Cup champion. However, a strong run by a motivated group of Venezuelans has them with a commanding lead over the former might of the Canadian contingent, with a surging Brasilian contingent knocking on the door for the third spot. Could Canada finish out of the top three? It will be very interesting to see that challenge go down to the wire in Ocala.

MANUFACTURERS CUP
2012 FWT Man Cup Champion Tony Kart has a strong lead and looks to repeat. However, a battle royal between CRG, Birel and Kosmic definitely will be one to watch as we finish off the FWT season in Ocala.

MG TIRES / GRANJA 500
This year, as in year’s past, all eligible entrants in the Formula Kart Racing program are entered into the chance to win a seat in the world famous Granja 500 endurance race. This race, held at the Beto Carrero’s Go kart Track in Penha, Brazil, features teams of drivers for every kart and is attended by some very famous drivers from Formula One, IndyCar and other professional series. Each and every participant that has gone to represent the Florida Winter Tour has come back raving about how much fun the event was and how much they would like to return. To find out who this year’s winner of “a trip of a lifetime” will be, log onto FWT LIVE! during championship Sunday of the Formula Kart Racing program weekend to find out.

ROTAX GRAND FINALS
This year, more than any other, the unprecedented eight FWT “tickets” to the Rotax Grand Finals are truly coveted. But not just because the level of competition, featuring no less than 9 reigning or former karting World Champions, representing 14 World Titles, is the highest in the 15 year history of FWT. This year, for the first time in the 14 year history of the Rotax Grand Finals, the RMCGF event will take place here in the United States and will include the Mini Max and Micro Max categories. Tune in on Championship Sunday during the FWT RMC to see who will go.
Of course, these are just some of the fantastic awards available at the Florida Winter Tour. To find out who takes home The Palms, you’ll need to be in Ocala or log on to FWT LIVE! through www.FloridaWinterTour.com

The Florida Winter Tour is one of the world’s largest, longest running and most geographically diverse kart racing programs. In 2012 the FWT featured over 400 drivers from 28 countries and all six karting continents, and for the 5th consecutive year was the world’s largest official Rotax Max Challenge series.