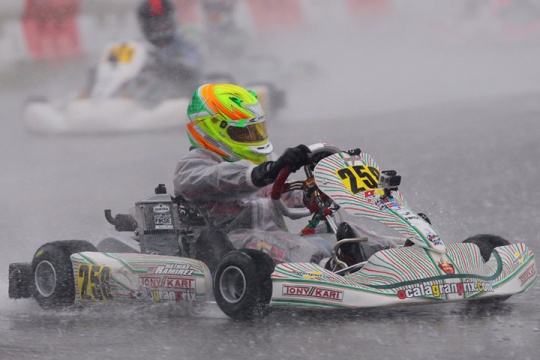 Press Release by: Florida Winter Tour (FWT)
With heavy storm systems slamming Palm Beach Karting, MAXSpeed Entertainment officials were forced to delay the start of the prefinals until after 2pm. Nevertheless, the action continued and the teams and drivers were forced to make numerous changes to adapt to the conditions. With the racing resumed, the prefinal winners were determined by total kart control and a grand understanding on how to approach the near flooding conditions.
Rolison Performance Group Rotax MAX Senior

As the first class hit the track following the rain delay, the Senior MAX drivers scrambled to find the fastest line on the nearly flooded circuit. Oliver Askew checked out from the pack and never made a mistake from that point on. As Askew was heading towards the final turn on the last lap, he suddenly cut across the turn and slammed head-on into the barrier, citing a brake failure. With Askew out, Kirkwood crossed the line in first position with David Malukas in second and Zachary Claman Demelo in third.
Falcone GP Rotax Masters MAX

The Mini MAX prefinal was all business for frontrunner Tyler Gonzalez. Gonzalez led every single lap and never once risked his position with an on-track mistake. Following Gonzalez, Matheus Morgatto finished in second and Sebastian Montoya moved into third position on the final lap.
Mojo Tires Rotax DD2 MAX

With Askew starting on pole alongside DTM rain master Robert Wickens, DD2 was looking to be an exciting showdown between the two talented drivers. Nevertheless, Askew found the same speed he displayed in Senior MAX, taking off from Wickens and easily winning the prefinal. Luke Chudleigh rounded out the top-three for DD2.
Mojo Tires Rotax DD2 MAX Masters

Christian Cornejo completely dominated the DD2 Masters prefinal. Driving exceptionally well in wet conditions, the Chilean driver easily pulled away from the rest of the Masters drivers and quickly started passing DD2 Senior drivers. Cornejo would go on to place in an impressive eighth position overall in the combined class.
AM Engines Rotax Micro MAX

The youngest class remains a crowd favorite as the talented young drivers constantly surprise many with their exceptional race craft. In drying conditions, Brayon Tiner held off Josh Pierson to win the prefinal. Pierson made his presence clear as he attempted to move into the lead all race long, but failed to do so until the checkered flag.
Koene USA Rotax Junior MAX

Mathias Ramirez scored another prefinal win in the Florida Winter Tour, finishing ahead of Nick Brueckner and Ryan MacDermid. Ramirez drove a perfect race, maintaining his rain tires throughout the prefinal by running through mild puddles, staying ahead of the pack in the process.