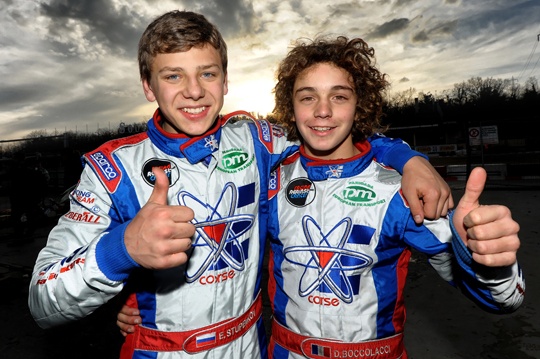 For Energy Corse, the season continues as it has started, with victories and podiums! The last few meetings (Winter Cup, WSK Euro Series and Andrea Margutti Trophy) have been particularly rich in results for Mick Panigada's team.
Thanks to a top-level kart, careful preparation and a structure that leaves nothing to chance, Energy has been capable of adapting to the different conditions found and to the characteristics of circuits where drivers competed. Dorian Boccolacci, who won the WSK Master Series at La Conca in KF in early February, showed again some excellent performances at the famous Margutti Trophy...

2 Energy on the KF Podium at Margutti
Dorian Boccolacci continues to improve within his new team, taking advantage of team Energy Corse's international experience. Seen on the podium of the first round of the WSK Euro Series at La Conca – after leading the race – and 7th at the Winter Cup, the young French driver sought a victory on the circuit of Lonato, during the 24th edition of the Andrea Margutti Trophy. His team mate Egor Stupenkov showed a brilliant performance climbing up to third. As for very fast drivers such as Vasily Romanov and Sam Snell, they had the honour of finishing in the top 10 of the WSK Euro Series final at La Conca. Both with TMs from JFR or Parillas from HP, Energy chassis were brilliant at this start of season.

Parker Thomson: Again Brilliant in KF Junior
3rd in the WSK Master Series at La Conca, 8th in the Winter Cup, 5th in the WSK Euro Series at La Conca and then 6th in the Margutti Trophy: Parker Thomson was definitely one of the protagonists of a category where anything can happen. With the Energy team, the Canadian driver feels totally at ease in high level European competitions. To contribute to the growth of these drivers is a golden rule for Energy Corse!

Johansson Back at the Top in KZ2
Joel Johansson did not compete much in 2012 and now he is determined to find his best form this season, supported by the Energy Corse which he knows very well. His two 4th places at the Winter Cup (against all the best drivers in KZ1) and WSK Euro Series at La Conca demonstrate that Johansson is likely to be back onto the podium very soon. Always very fast, his team mate Simas Juodvirsis is going to be again one of the key figures of the season, as witnessed by his 5th place in a WSK Euro Series final at La Conca as well as his 4th place in the Margutti, where he started from just 10th place. During the meeting in Lonato, the Brazilian driver Gaetano Di Mauro completed the top ten with his Energy-TM.

Congratulations to all the drivers, technicians, engine mechanics and partners who work with Energy Corse, as well as to all the drivers who excelled in national competitions all over the world, from Europe to Australia, not to mention the American continent…