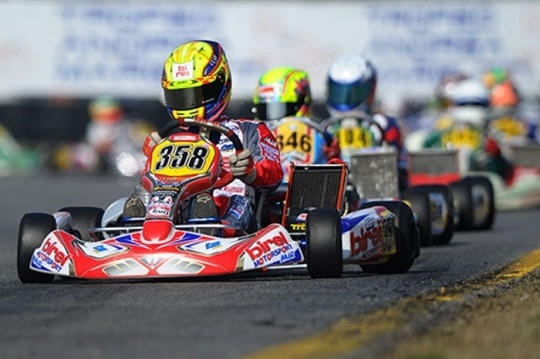 The French driver won the pre-final and finished 1st on the podium in the KFJ Final; the weekend was positive also for the RK team.
With about 180 drivers distributed into the 60 MINI, KFJ, KF and KZ2 classes, the 24th edition of the Andrea Margutti Trophy, which took place on the Lonato track, has been filed with a great sporting and organizational success.  As regards the competition, Birel Motorsport participated with less drivers, featuring the French Gabriel Aubry and the Venezuelan Mauricio Baiz in the KFJ, as well as two young drivers in the 60 MINI (Nicola Bertoncello and Edoardo Rossi); this was a further test before the International karting championships.
The feedback on the track was once again very positive, especially for Aubry who is proving to be one of the most competitive young drivers in KFJ; the French driver of Birel Motorsport, in fact, came 2nd in the qualifying heats, won a heat on Saturday and won with assurance the pre-final on Sunday ahead of Sitnikov.  Also in the Final the competitiveness of Birel-TM seemed to be able to take the French driver to the top step of the podium, but after leading the race from start to finish a little uncertainty at the photo finish favoured Tickum and Sitnikov, who won ahead of him in the sprint.
The KFJ also featured Mauricio Baiz who was competing in his first race of the season; his main goal was to become familiar with the 2013 technical material, making a sort of "general test" before the next races where he will be competing in WSK Master, Euro and World CIK-FIA, as well as in the Italian championship. From this point of view, his experience, despite the weather conditions that often affected the team work, can be considered as positive as well as his 12th position at the finish in the Final.
In the Margutti Trophy Bertoncello and Rossi also raced for Birel in 60 MINI: the first one had a great weekend and came 6th overall in the qualifications and 9th in the Final, while Rossi, at his first race in the season, won the direct qualification for the Final, but was later affected by some contacts.  In general as regards the competitions in the Margutti Trophy, the official RK team performed very well, above all in the KF class, where Pajuranta and Waldher finished respectively 4th and 6th in the Final. Still with RK, a good performance by Gyr in KZ2 is to be recorded: he finished 8th in the Final.