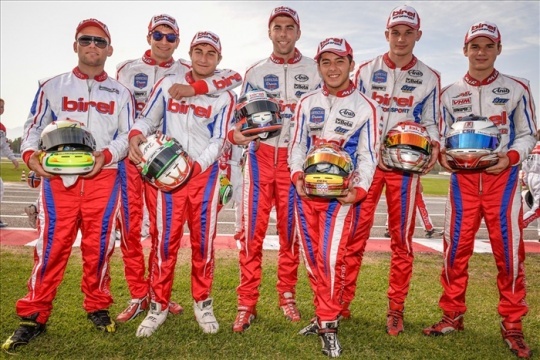 Press Release by: Birel Motorsport
A week of sunshine and summer temperatures have characterised the event on the International Circuit of Sarno which hosted the world championship in the category of karting, the KZ.
In KZ1 Paolo De Conto, once again, confirmed his impressive speed and great driving skills, and the new 2015 version (BirelArt) chassis also performed excellently.

Ranked tenth in qualifying times, De Conto finished the first race in 4th place with good lap times; in the second round, after a none too perfect start, he was hampered by a slower driver, who blocked his way for two consecutive laps, until the contact that forced him to retire.  The result of this race, unfortunately, relegated him to 22nd place for the semi-final.

After a not too bright season, the Birel newcomer, Mirko Torsellini, arrived on the scene qualifying in eighth position with the technical assistance of Alessandro Manetti, gaining a sixth and a third place in the heats, resulting in him starting in sixth place for the semi-final, showing that he is back among the leaders in the category and confirming the performance of the new 2015 version chassis.

The semi-final once again saw an impressive comeback by De Conto who managed to finish in eighth place after overtaking and clocking up fast laps; Torsellini however, didn't get a great start, but finished in sixth place close behind the leaders.

At the start of the final,  De Conto was in 4th place behind Ardigo, Caponeschi and Torsellini; after only 3 laps he took the lead of the race and stayed in front for a few laps but slipped back into fifth place as a result of a knock due to an imperfect carburetor setting, leaving space for Drezen.  Towards the end, he picked up the pace and hung on to the leading group finishing in fifth position; Ardigo won, ahead of Caponeschi, Drezen and Torsellini.

In KZ2 all Birel drivers gave excellent performance: from Jan Midrla to Paolo Ippolito and Jordi Van Moorsel, but the surprise of the weekend was Menno Paauwe. In sixteenth position after the qualifying times, he won three rounds, as well as gaining a third and a fifth place that put him on the front row for the semi-final, the Dutchman won the semi-final thus starting in pole position on the final grid.
In the final, after a great battle, he finished in a well-deserved third place confirming his excellent overall performance.

He finished with a very positive result in this world event, confirming the effective development work done in the course of the season in anticipation of the new approval with the new version 2015 chassis that will be produced and marketed by the new "BirelArt."

Ronni Sala: "I am very pleased with the performance demonstrated by all the Birel drivers, confirming the excellent work done during this season in the category with the change. We are confident of being able to bring in the new karts, in the 2015 version, with some important and positive improvements that will help all the drivers using our BirelArt chassis to be more competitive."


photos by A.Vernardis The RaceBox