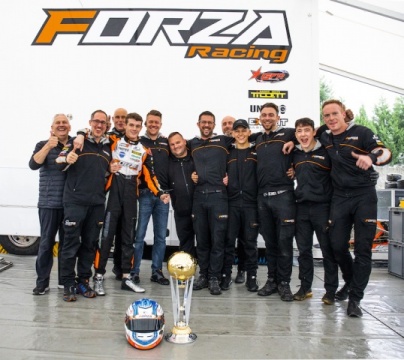 In Castelletto di Branduzzo, during a weekend characterized by difficult weather conditions due to intermittent showers, all the drivers showed a good pace confirming their good form of the season’s recent outings.

OKJ – Van t’Hoff just a step from the podium

The four Juniors held high the colors of Forza Racing, with noteworthy runs on both wet and dry track.

Dilano Van t’Hoff – He just missed the podium, finishing the event in P4 by 35 thousandths from the 3rd position. In qualifying, Van t’Hoff had scored the 4th absolute time, consequently obtaining pole in Group D, finishing 3rd at the height of the 4 heats disputed. The Dutch driver also achieved the second best time of the Final.

Josh Dufek – After a difficult qualifying session on the wet track, he was the protagonist of a great comeback during the weekend. The Austrian in fact finished the series of qualifying heats in P12, then reaching 11th in Prefinal B. Starting from P21 on the Final grid, Dufek raced through the pack to finish in P14, despite a three-second penalty due to the spoiler.

Gilles Stadsbader – At his debut with the team, he put in a solid weekend in terms of competitiveness. The driver on board the Exprit #392 motorized TM ended the qualifying session in P11, just over a tenth from the top 10. 13th after the series of heats, Stadsbader put in a great effort on Sunday, closing the Final in P22 despite a 3-second front fairing penalty.

Alex Dunne – Luck turned its back on the Irish driver on his 13th birthday’s weekend. After making great progress in the slippery conditions, he was forced to retire from the Prefinal with a technical issue missing the access to the Final.

At 7 Laghi Kart, the Briton made his first podium in a WSK Promotion event at his second outing with Forza Racing and on his debut at the Castelletto di Branduzzo circuit. After being among the fastest in all the sessions, Turney held up to the pressure of a Final with an uncertain climate, and earned himself an important third place for the championship. In the general classification, in fact, the driver of Milton Keynes is currently 8th with 7 points from P6.

Jamie Croxford, Founder: «It was a very difficult weekend on the weather front, but I’m happy with the work of my boys. My staff made an exceptional effort, making sure everything was ready for any kind of asphalt condition. The drivers, for their part, did not spare themselves on the track, and held nothing back. I’m very happy for the podium achieved by Joe, who in these two races has shown himself competitive right away».

The team will be back on track the weekend of November 25 at the Adria Karting Raceway for the last round of the WSK Final Cup.