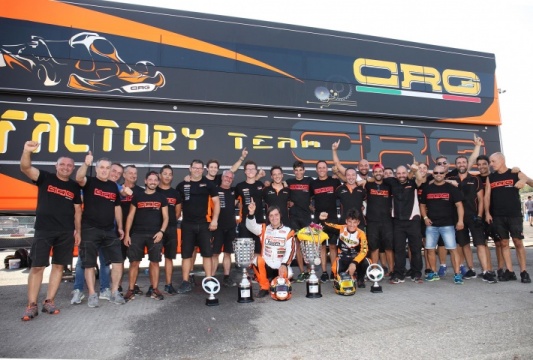 Press Release by: CRG Racing Team
The final round of the KZ and KZ2 European Championship had an exciting finale at South Garda Karting in Lonato. CRG colors have been the absolute protagonists.

Jorrit Pex, the new KZ European Champion. The victory for CRG at the KZ European Championship came with Jorrit Pex, who won his second title with the Italian outfit, after winning it back in 2012. The victory had earlier been taken at the flag by Paolo De Conto, who has been a great interpreter of this event and cross the finish line as first, a result that virtually awarded him with the Championship win. His race was later on voided by Stewards though, as they decided to penalize him for an overtaking move on Celenta, that ended up in a collision between the two. Due to this episode, that was judged not as normal racing incident, De Conto was handed a 10s time penalty. The disappointment for this decision was mitigated by the fact that another CRG driver, Fabian Federer, inherited the win after a great race, and that the title of European Champion went to Jorrit Pex, who ended the Final in fifth place and was promoted from second to first in the overall classification.

CRG claimed its 46th European title and the 24th in shifter categories. This result confirmed the chassis made by the Italian factory on top of the International scene and places CRG as great favourite to the victory of the KZ World Championship and World Cup KZ2 next September in Genk.

Pedro Hiltbrand also put in a very strong race in Lonato, completing an excellent comeback that brought him up to the final P6.

A Super Denner in KZ2. Emilien Denner scored an incredible win in KZ2. He has been the excellent protagonist of the race in Lonato and rewarded CRG with the awareness of having a victorious driver also in this category. Denner, who has been competing on Kalì-Kart, is the new name of KZ2, category in which the young French driver has been competing for only one year. He has already taken the luxury of winning a race of the European Championship in Lonato out of the 92 drivers, and is fighting for the victory in the German KZ2 Cup. Hats off!

The Championship was won by Adrien Renaudin, thanks to the points harvested in Salbris.  Denner ended 3rd in the final classification.

Among the other CRG drivers, Jean Luyet has also scored a strong result in KZ2 ending the Final in 11th position, but also showing great speed in qualifying heats. Marco Valenti also deserved a round of applause as he qualified for his first Final of a European Championship. The Spanish driver Gerard Cebrian Ariza should also have run the Final, but he was not allowed to get on the grid, due to a 2 minutes delay at the entry gate.